The cultural center of Dalgan is locating in the Balochistan, a region in Sistan-Baluchistan province of Iran in the south-east of the country. This area is suffering from poverty and low quality of life which is mainly coming from its strategical location and dry and hot weather condition.

The pre-defined plan for the design stage was about bearing in mind some classes and workshop rooms to provide spaces for teaching courses related to the local traditional art facts of the region. A conference hall was well-thought-out for allocating to the exchange knowledge about unique and rich cultural and artistic aspects of previous generation lifestyle in Sistan-Baloochestan, as it is ignored and fade up gradually during the time.

Our team of designers puts their principal target on providing an excellent context for reminding locals and people beyond this area, the historical and traditional art of previous generations. In primary approach, it was deciding to prompt required management spaces and facilities for such cultural center to manipulate the strategies decisions toward investigating and proposing strategies to address primary goals of a cultural center in the expansion the current knowledge about historical cultural and artistic achievement and the best method of applying them in Current people’s life. The consequence of this trend is saving the identity of any nations for a future generation.

The project is in the hot and dry south-east of Iran, and we attempted to look to the location of the project as a positive and get benefits from its potentials as much as we could in our design process. Any area has its traditional METHOD OF ACTION IN FACING WITH ITS NATURAL HAZARDOUS AND CONDITION; we this point of view, we select some of those conventional methods and applied them in a modernized way in our project for affording natural and passive ventilation system of the building which this by itself display the building aim and objectives for reviving the cultural aspects even in architecture.

Separate functional buildings were located under an expanded porous roof which acts as a shelter to take the wind inside and circulate it between buildings, it will cool down the external crust of the structure, in addition a beautiful waterfront in between buildings make the process of cooling down more accessible as the wind flows over it and decrease in temperature. All these types of strategies create a pleasant semi close functional space for users.

This different arrangement of the buildings concerning each other under porous shelters inspired unconsciously the feeling of walking in ancient alleys of the city which were very common in their urban and architectural design. But here this question will come into the mind; how and in which way this roof could upgrade the quality of space in addition to saving its consistency with people’s beliefs in this area?! Along with this aim, we conducted researches about the local art crafts and its cultural demands as we finally diagnose that needlework is the most extensive art which is using extensively in local traditional clothes of people. The art of working with needle and colors have roots in people’s hearts and mind which is undeniable. Therefore, we designed the roof cavities on the base of inspiration which we got from the needlework schemes and located them in seeking two roles from them, one as an ornament and the other as part of the ventilation system. For covering the idea of being compatible with local’s historical memory, each building was colored differently. A combination of the porous roof with a plotted colored crust of building walls as background would create an enjoyable atmosphere for the users especially in the sunset as there would be no need for creating any artificial peaceful space there.

The whole covered area is 2000 square meters; while the semi-opened space under the shelter is about 700 square meters and can be used as a multi-functional area in special ceremonies and circumstances. 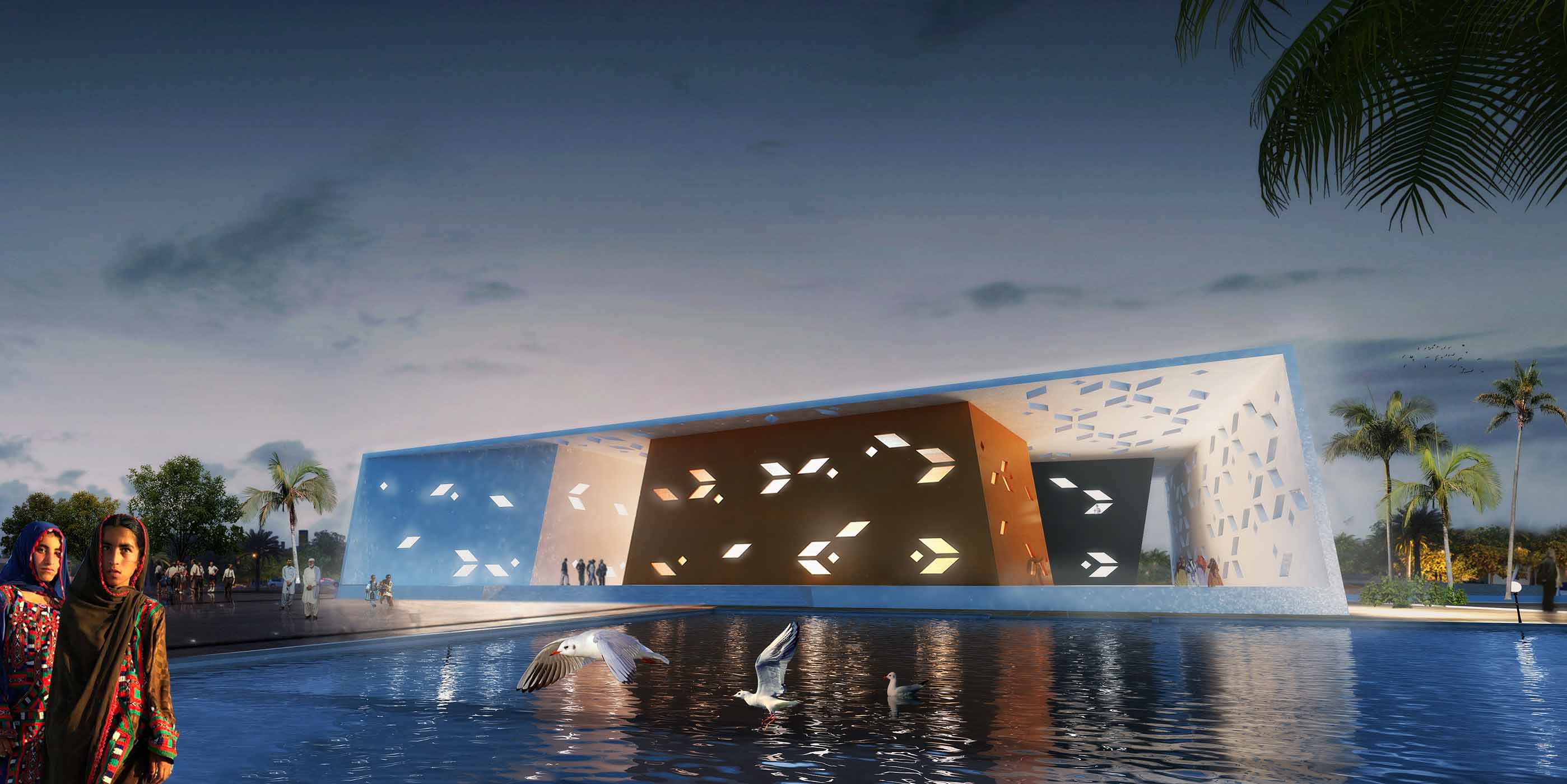 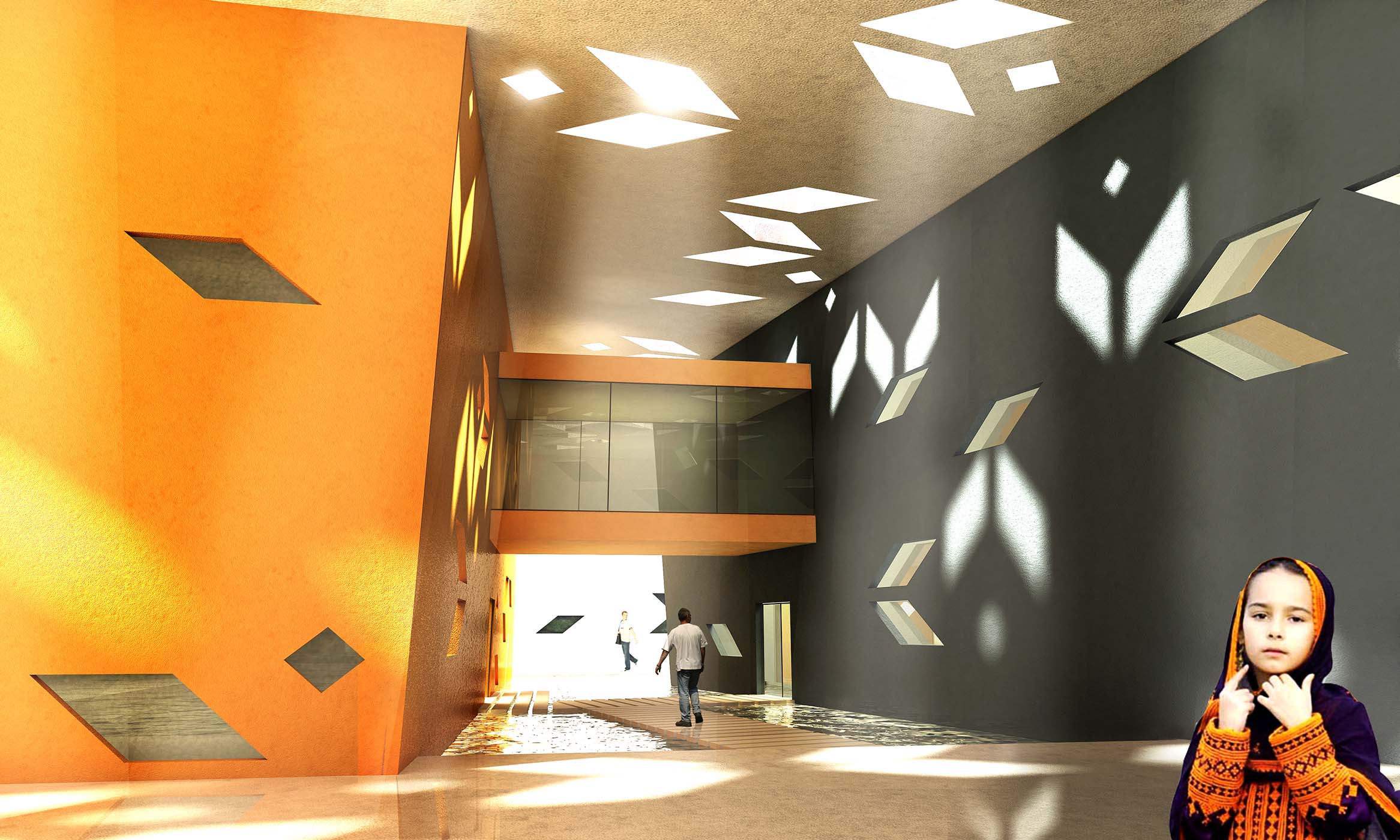 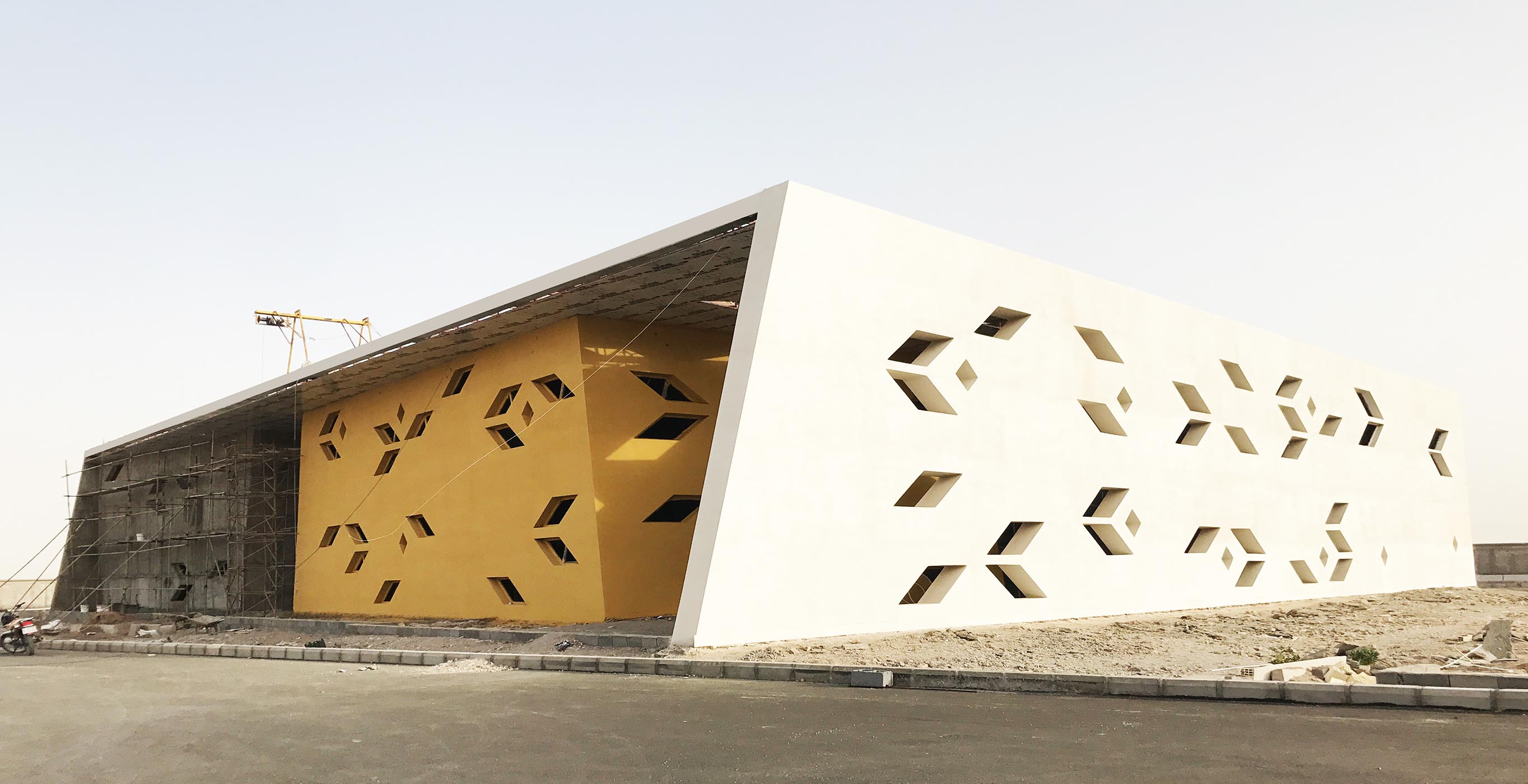 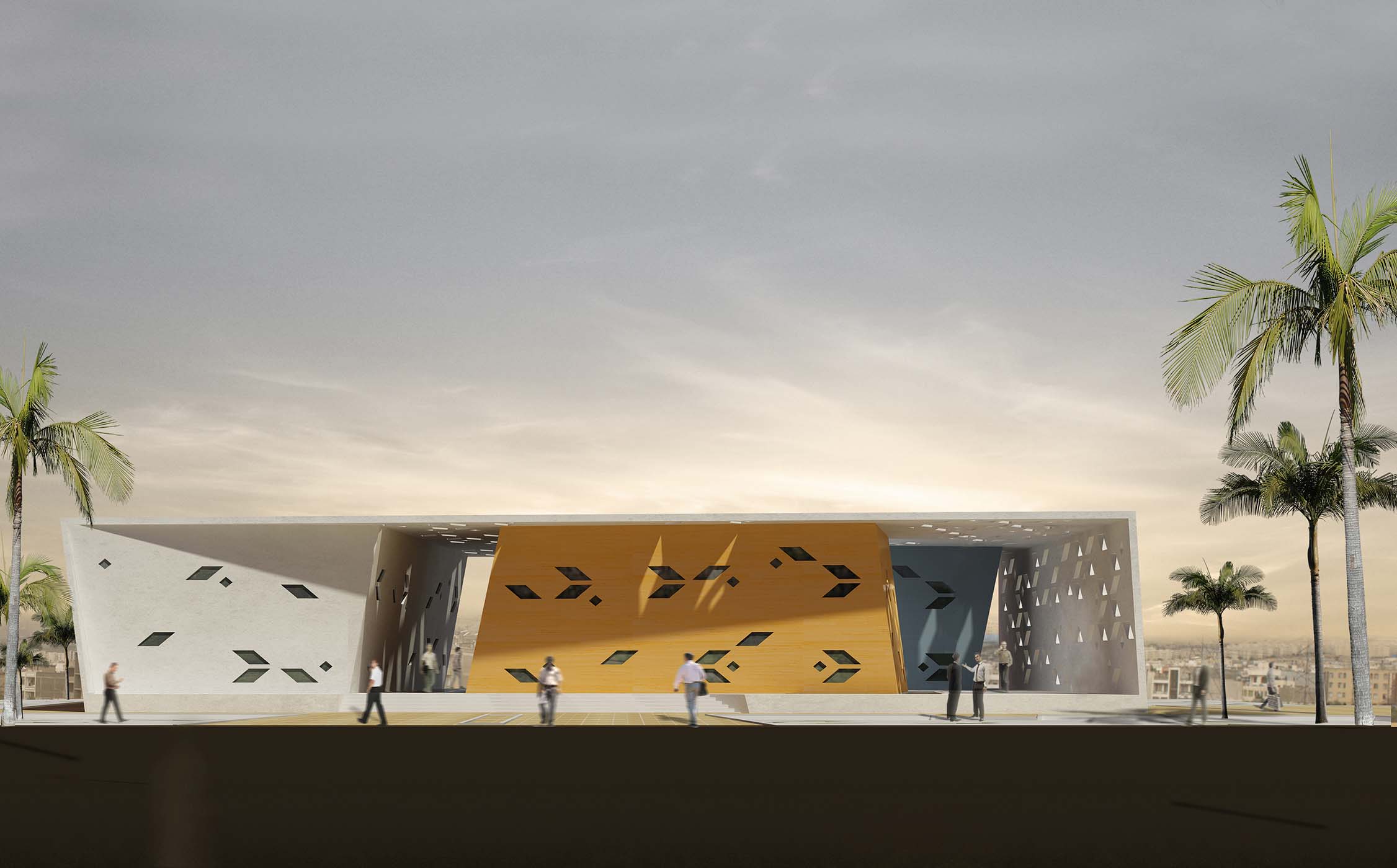 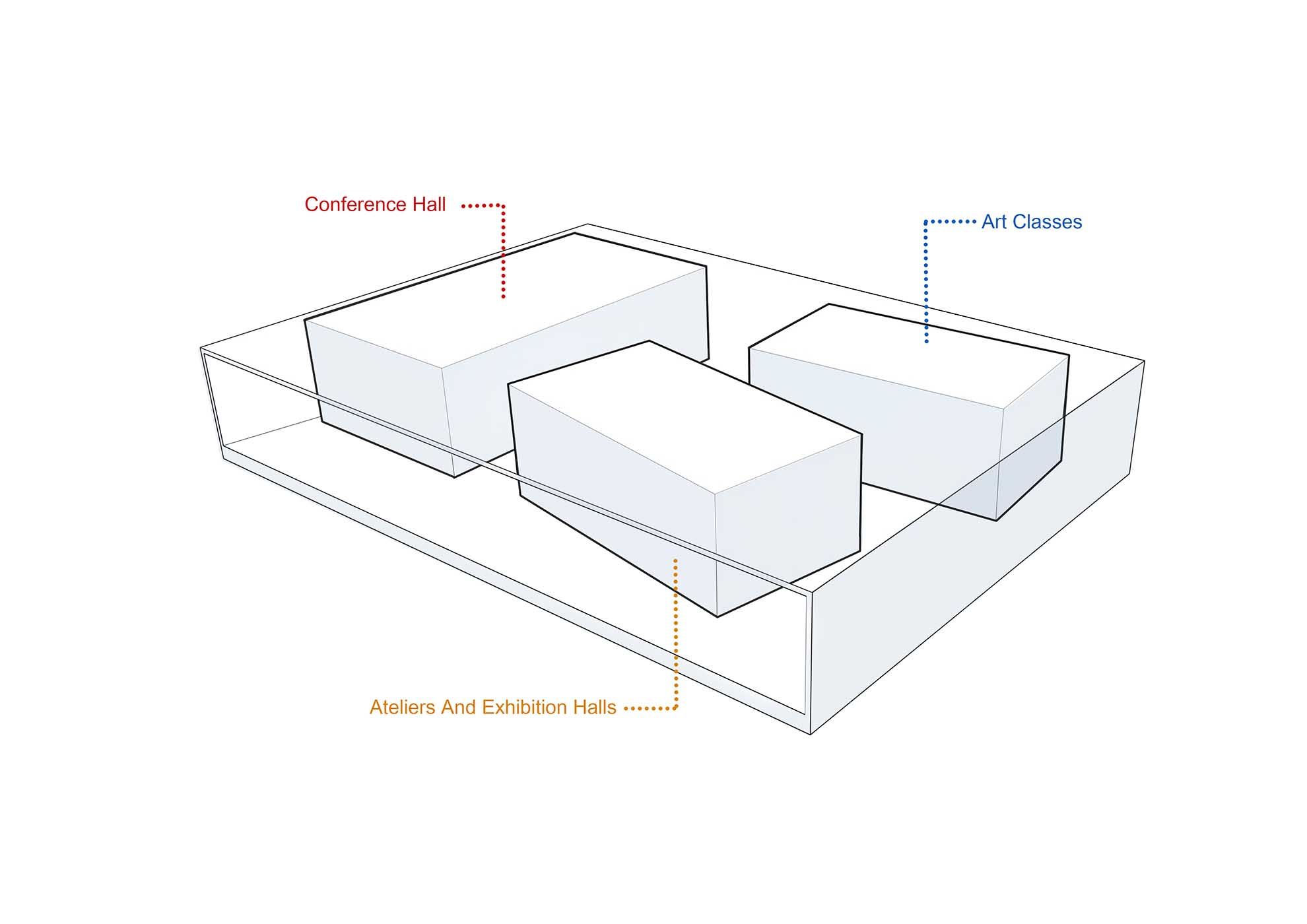 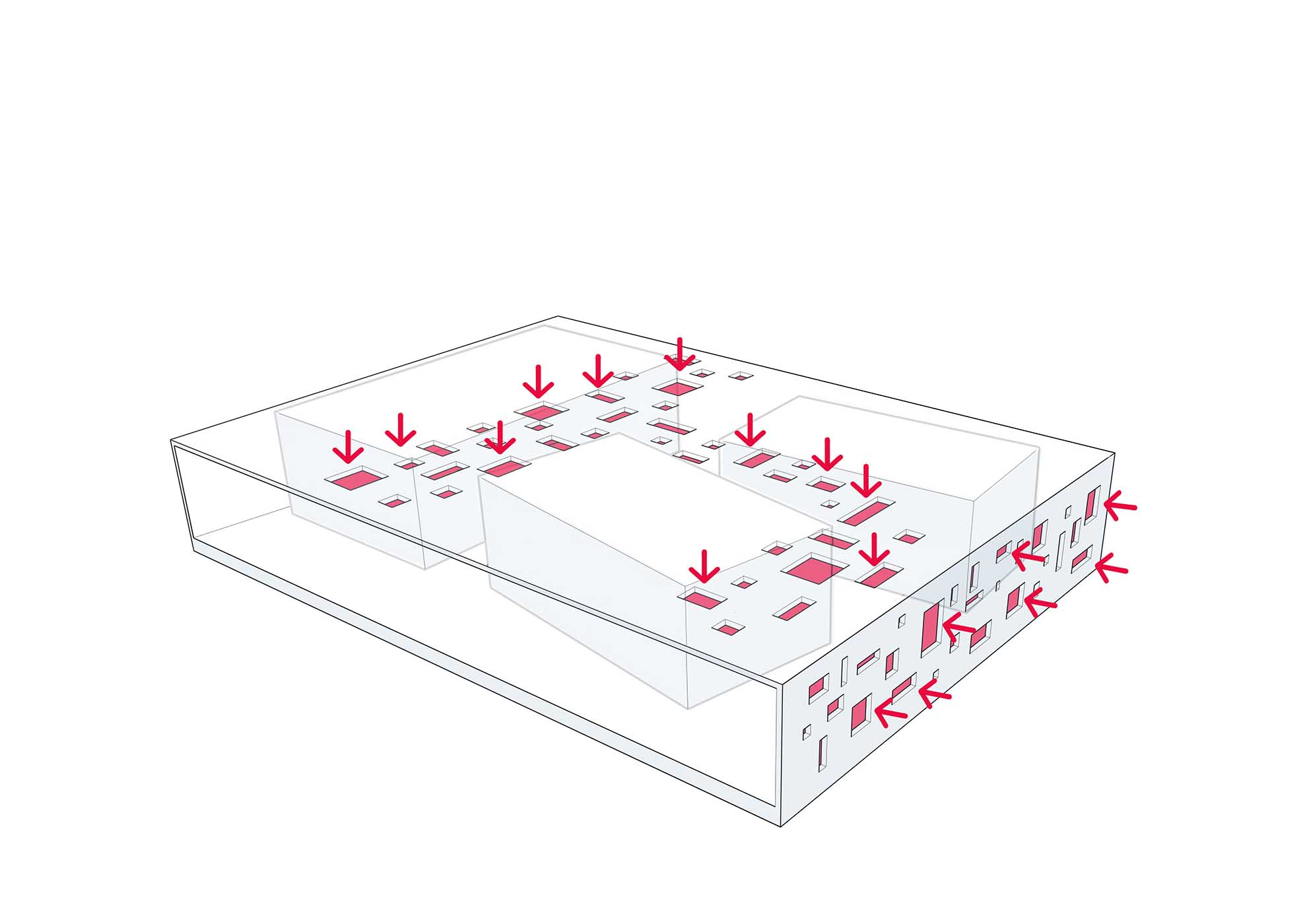 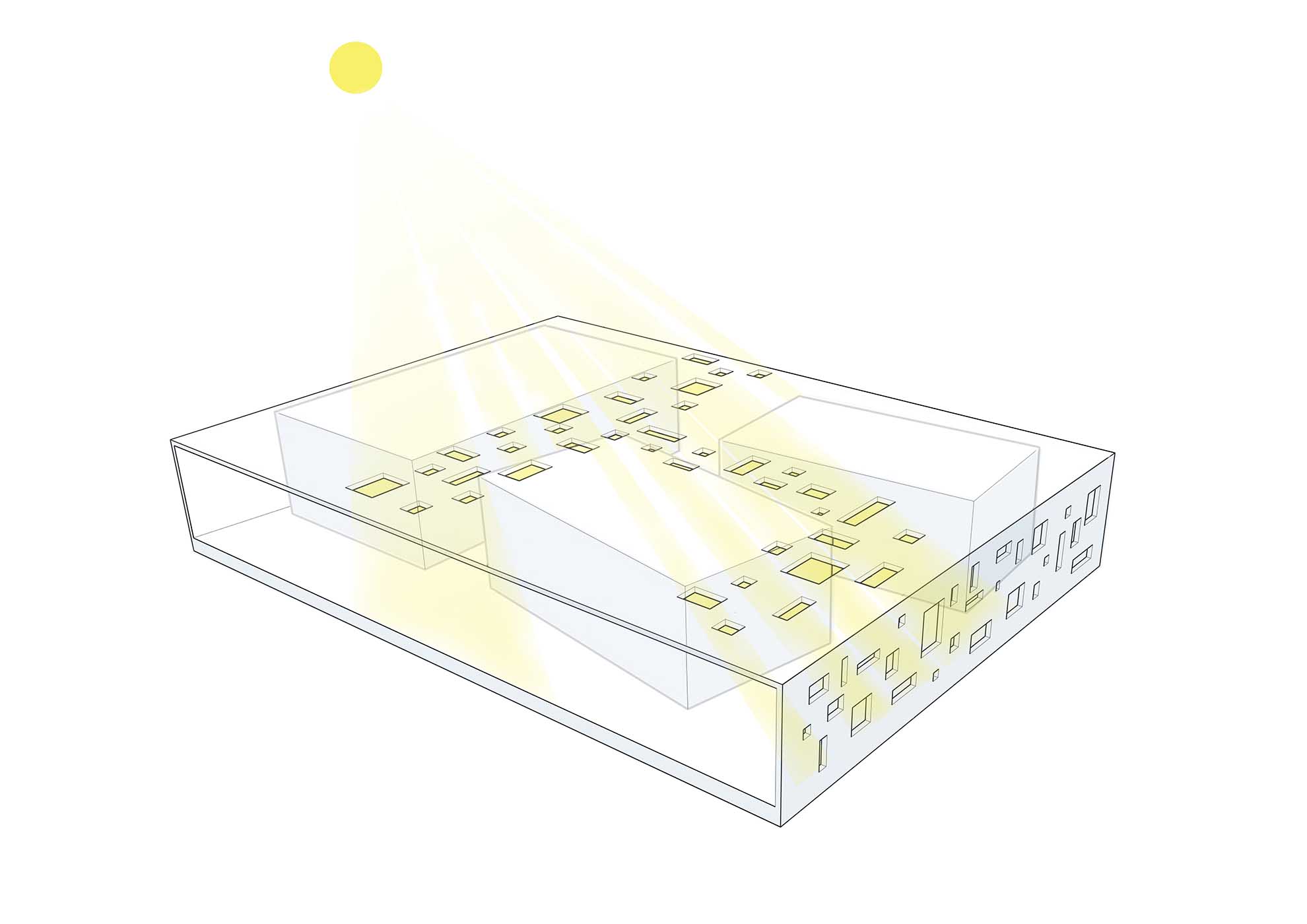 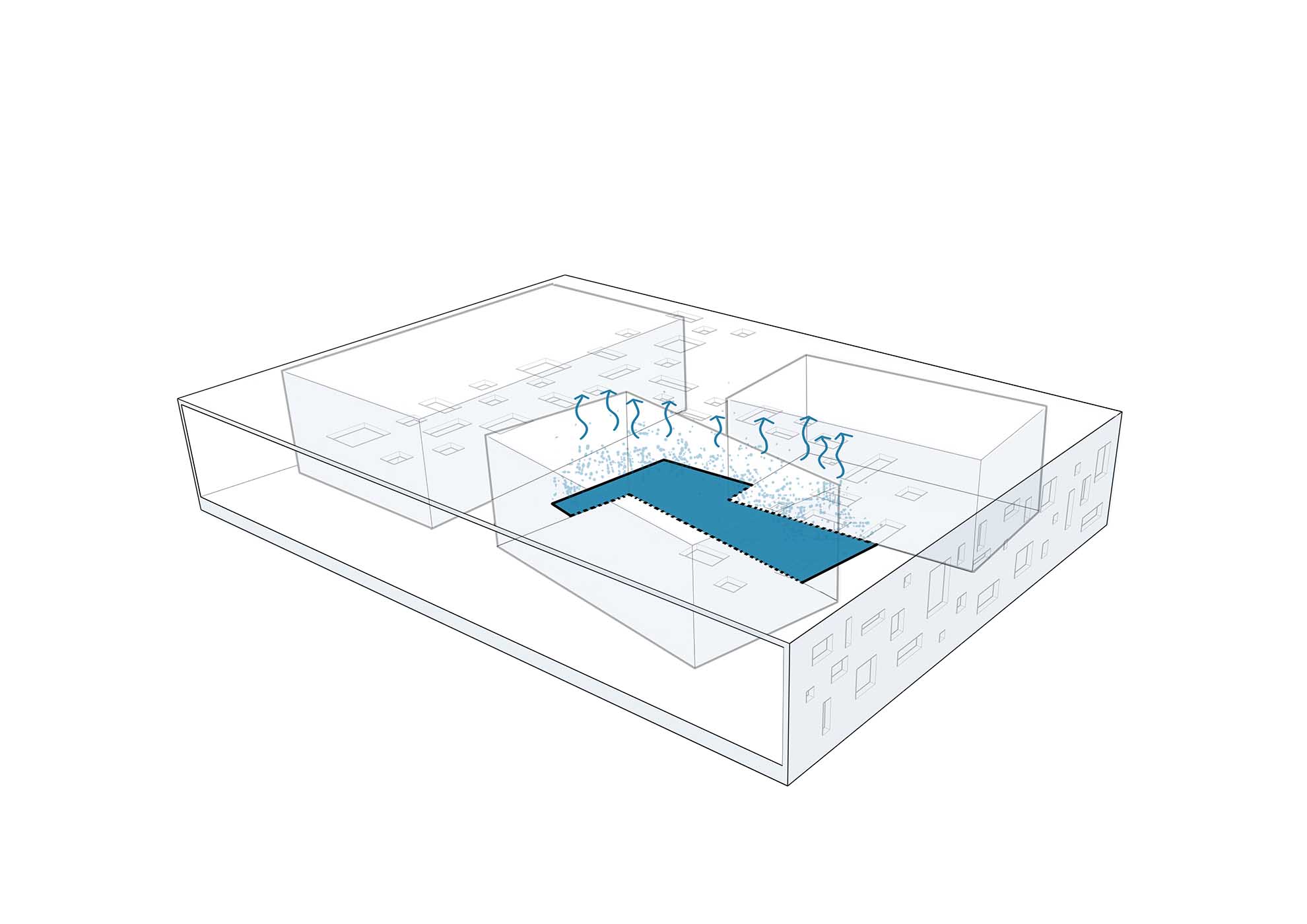 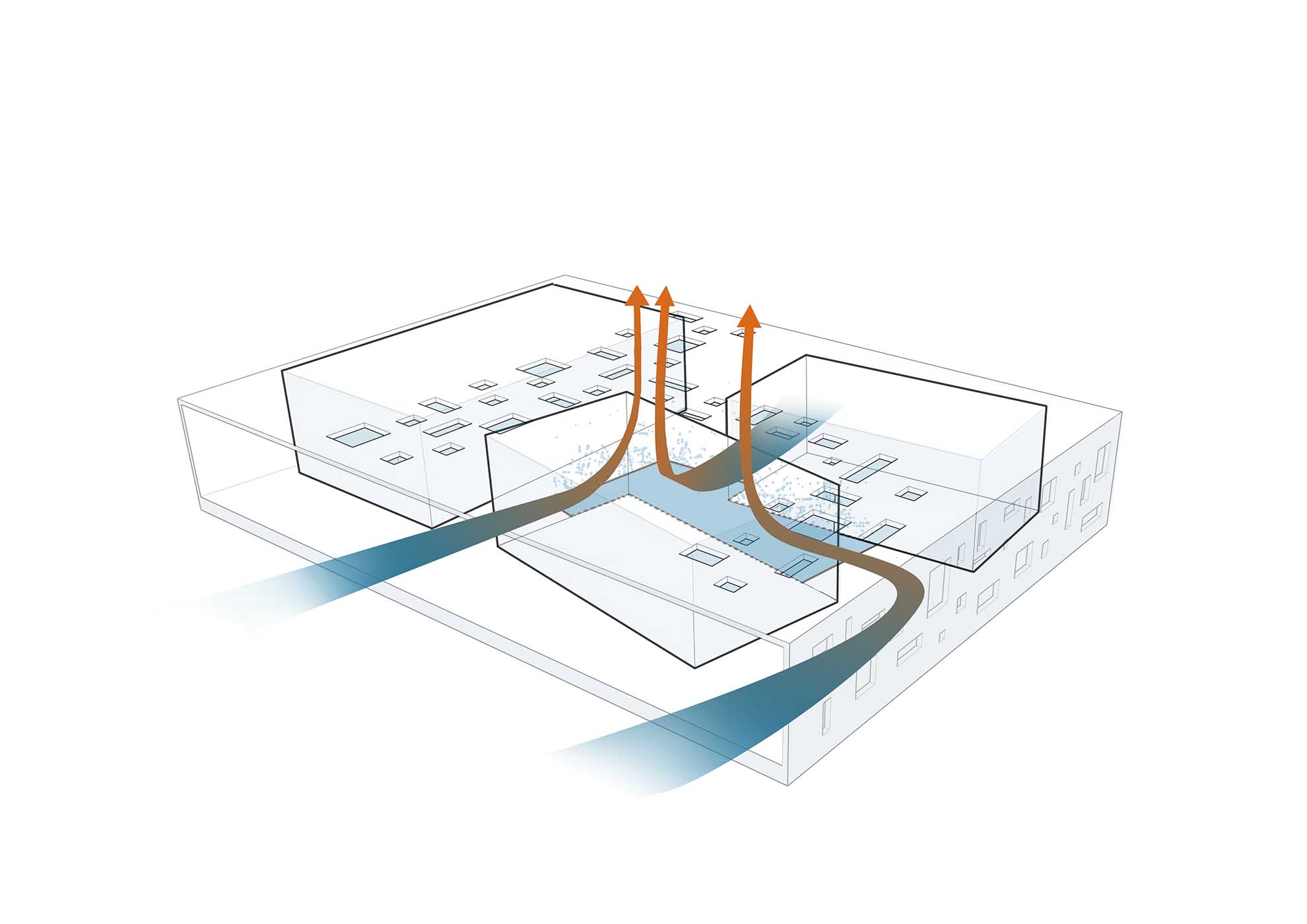 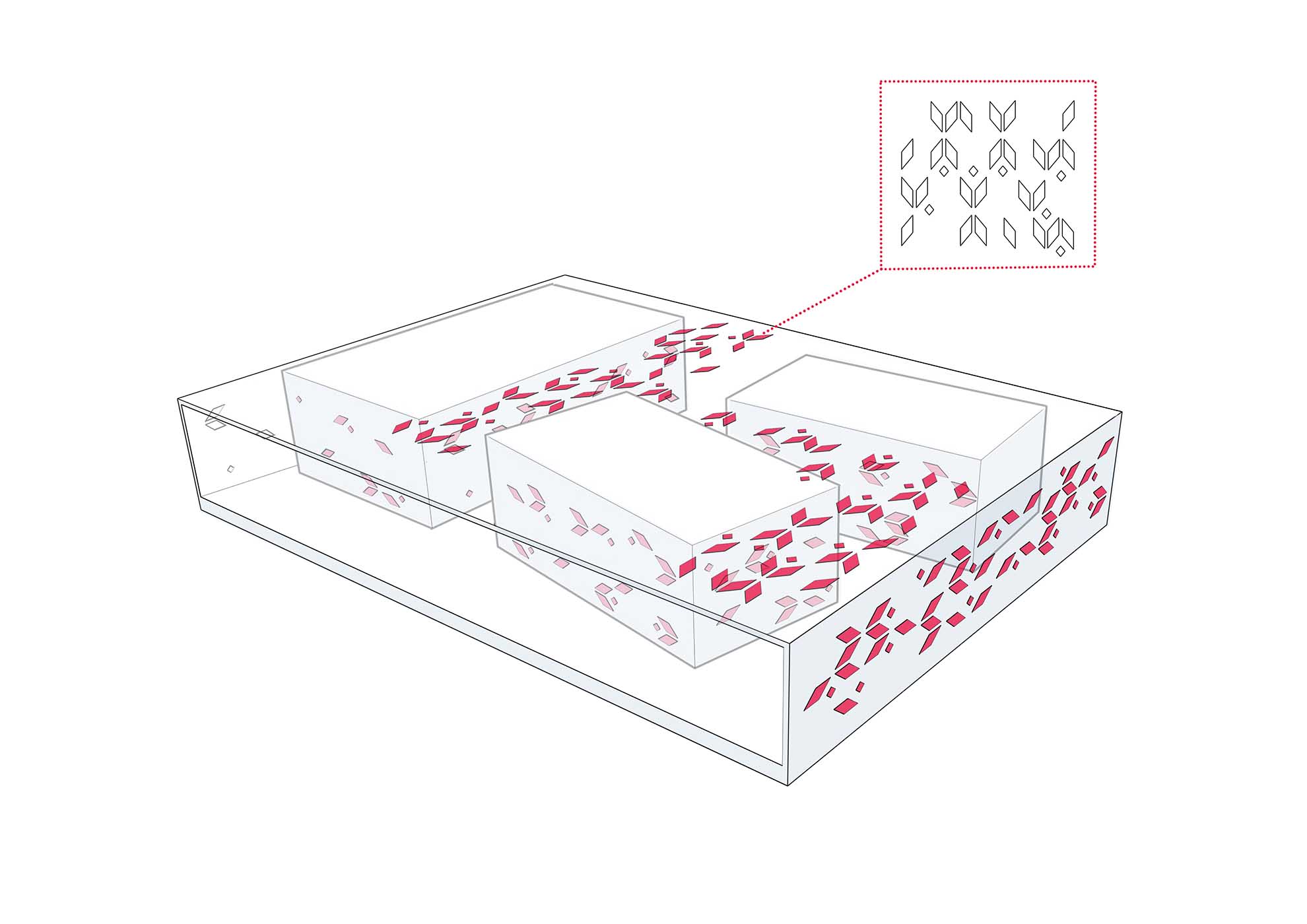 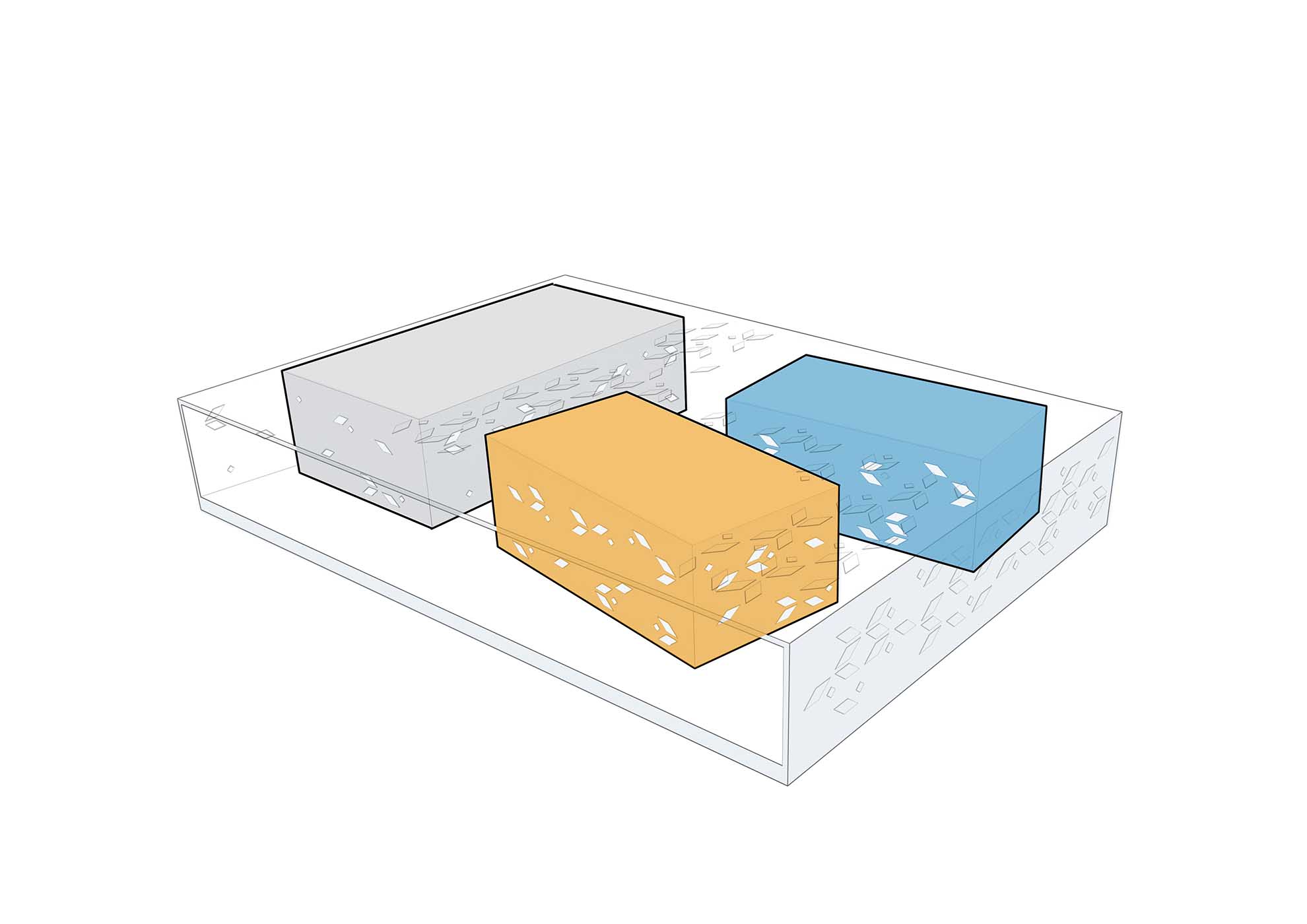