Being situated in a territory in the southern coast of the Caspian sea -a town called Chaboksar- 216 meters above sea level, in Iran, provides a calm and green area for housing a nuclear family. A dwelling space where in tries to frame surrounding environment neatly and communicate eloquently.

Climate
This area enjoys a climate known for its moderate, mild and Mediterranean-like. The Alborz range provides further diversity to the land in addition to the Caspian coasts, causing annual heavy rainfall and mild climate. However freezing temperature is seldom reported in the coastal areas.

Challenges and Responses/philosophy
Recently, the spatial diagrams of sustainable houses are likely resembled and parameters like, solar panels, isolated walls, doubled glasses and etc. are common. It is obvious that most of them incline to appear as an airship. Moreover, the Glass houses of twentieth century such as Phillip Johnson and Mies van der Rohe s‟ attempted to dissolve visual boundaries between inside and out .However, sometimes functions were mixed and privacy and aesthetics aspects were more likely to be ignored. Meanwhile, recent architectural debates tend to eliminate the concept of “dwelling “ defined as a machine by challenging of constructing a sustainable house which interacts with its environment, exchanges energy and functions as a self-sufficient entity ,while human presence, aesthetics values and various experience in architecture atmosphere through the time are indispensible parts of architecture. Hence there is no mask between inside and outside.
Guilan architectural heritage experienced extroverted architecture while nature embraces the architecture and rural dwellers tend to welcome surrounding green areas warmly.

Architecture and Design
Four seasons house creates a legible interactive conversation of dwelling and environmental veils: Spring, summer, autumn and winter. It wears soberly what nature wears throughout the time. The building extends along east to west in regards to climatic conditions. “Play” of the volumes in the main wood cubic shell generates variation in spatial organization whilst maintains.

Four Seasons House
the privacy and independency of dwellers and concentrates on sociality of human being by the means of placing family activities and services areas in the centric cube .Hence the main cubic shell with its openings reunions separate functions in a box-like enclosure subtly and forms social life to approach a unity form. Moreover it induces shadows, breezy and cool spaces in regard to wind direction as a result of air circulation, diminishing the sunlight radiation and decrease air humidity during hot summers. Creating a terrace on top of the roof represents an alcove –Shahneshin- which comes from architectural background in southern parts of Caspian Sea in Iran.
The ground floor level functions as the public zone, the upper levels are private areas. Big windows facilitate a great indoor illumination and contribute to the landscape and dwellers experience spirit of seasons in nature .In fact, project is being re-created frequently in a 24-hours time . Windows portray surrounding environment and reflect it during the days, whereas at nights they represent landscape and frame it. As a result, in the combination of purity and simplicity of cubic structure and mutual communication, immediacy and sustained observation are provided.
The program calls for 2 single bedrooms and a master bedroom, an adequate kitchen, dining area, living room , a small gym and a swimming pool in an 800 sq meters area.

The projects aims to create a housing area in the site as a part of nature to generate the needed energy resources to live within today„s quality standards. Solar panels are favorably angled to receive an important amount of light, providing a percentage energy requirement of building. The Rain water is re-collected, stored in a tank, filtered and distributed to the lower parts of the house for drinking, lavation, and etc. In addition, heating system is provided by solar panels placed in top of the roof.

Materials
Applying Glass and recycled wood which is retrieved by (CHOKA) factory –wood and paper factory of Iran - in the near distance of Chaboksar, is an attempt to achieve nature conservation. 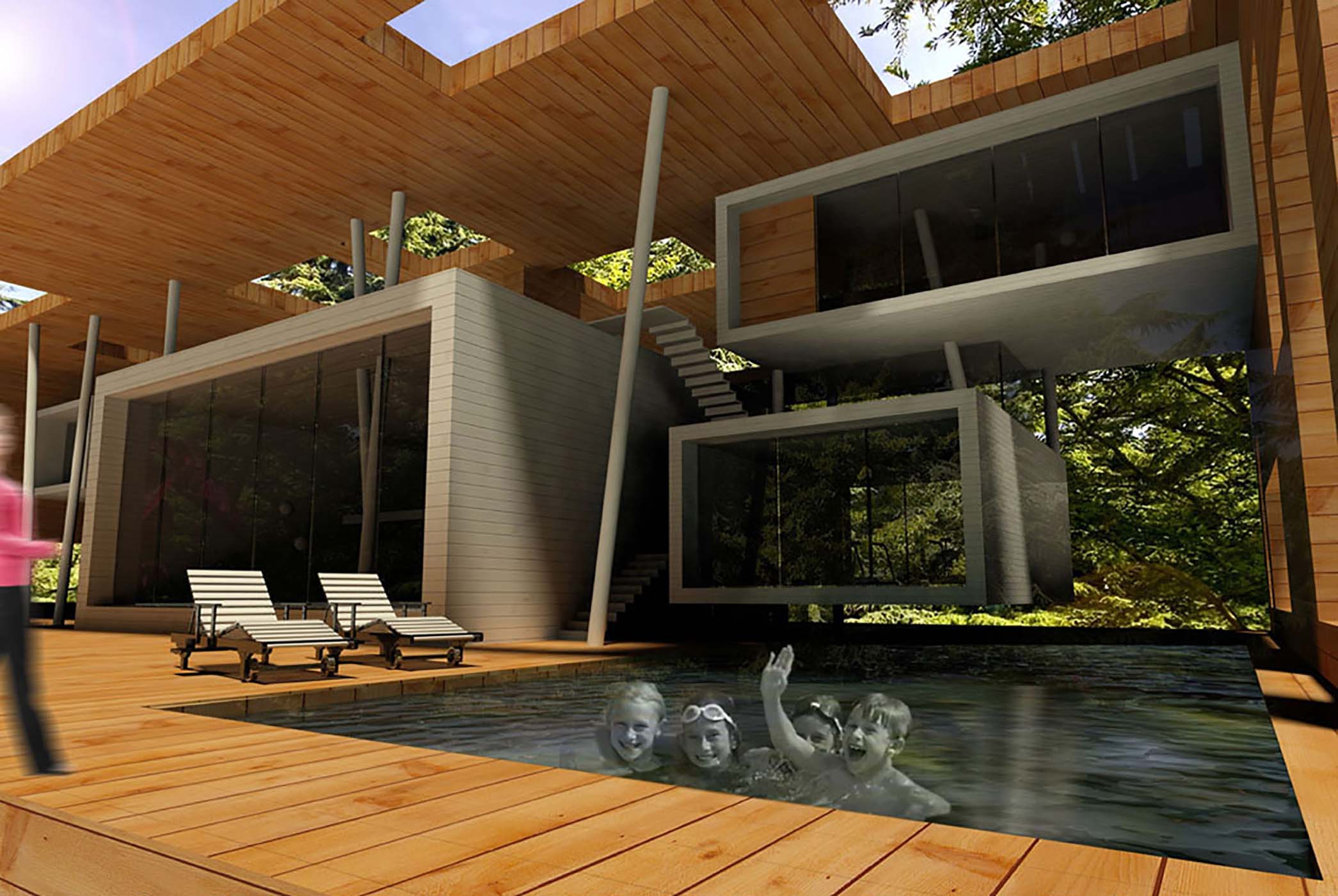 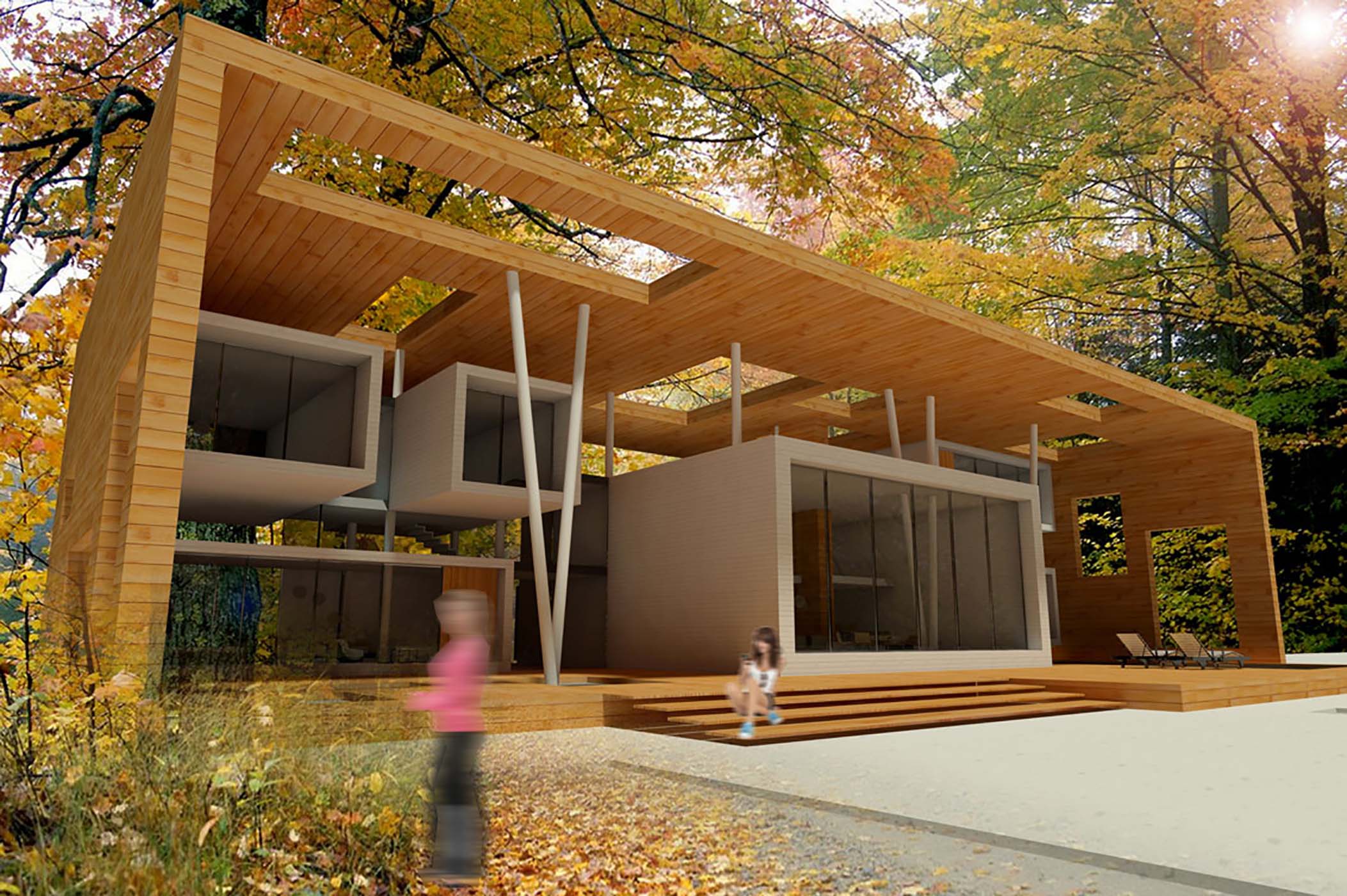 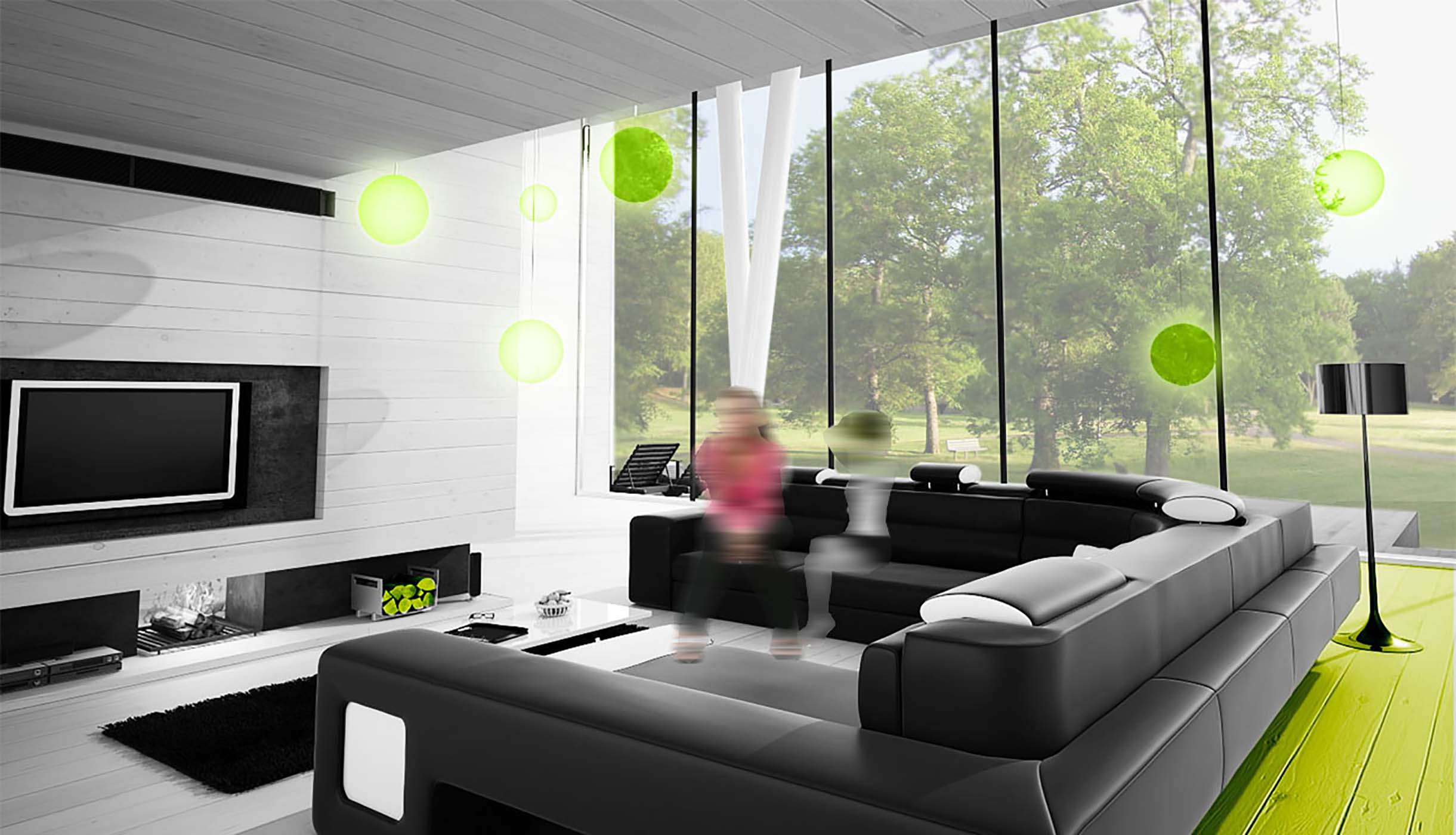 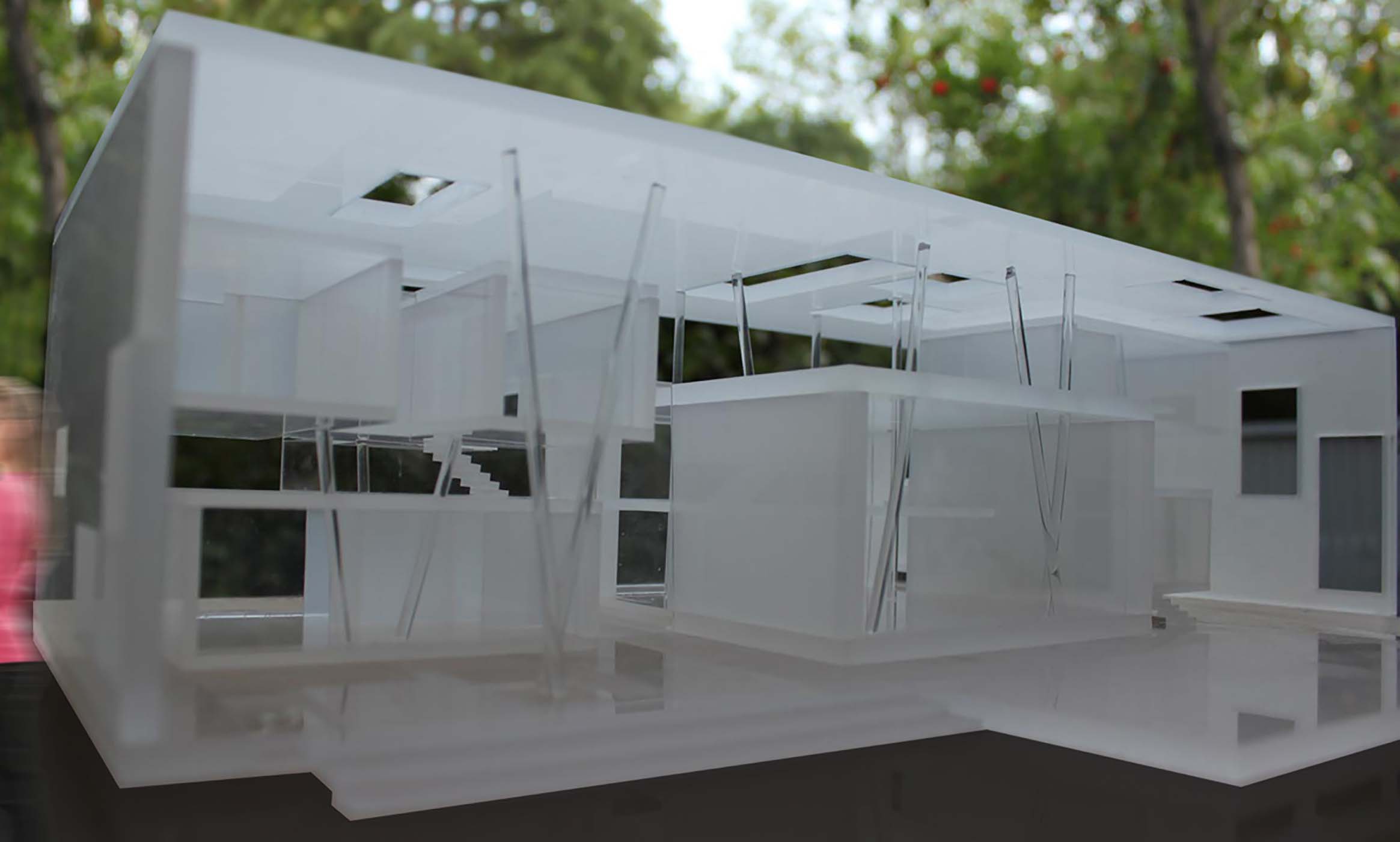 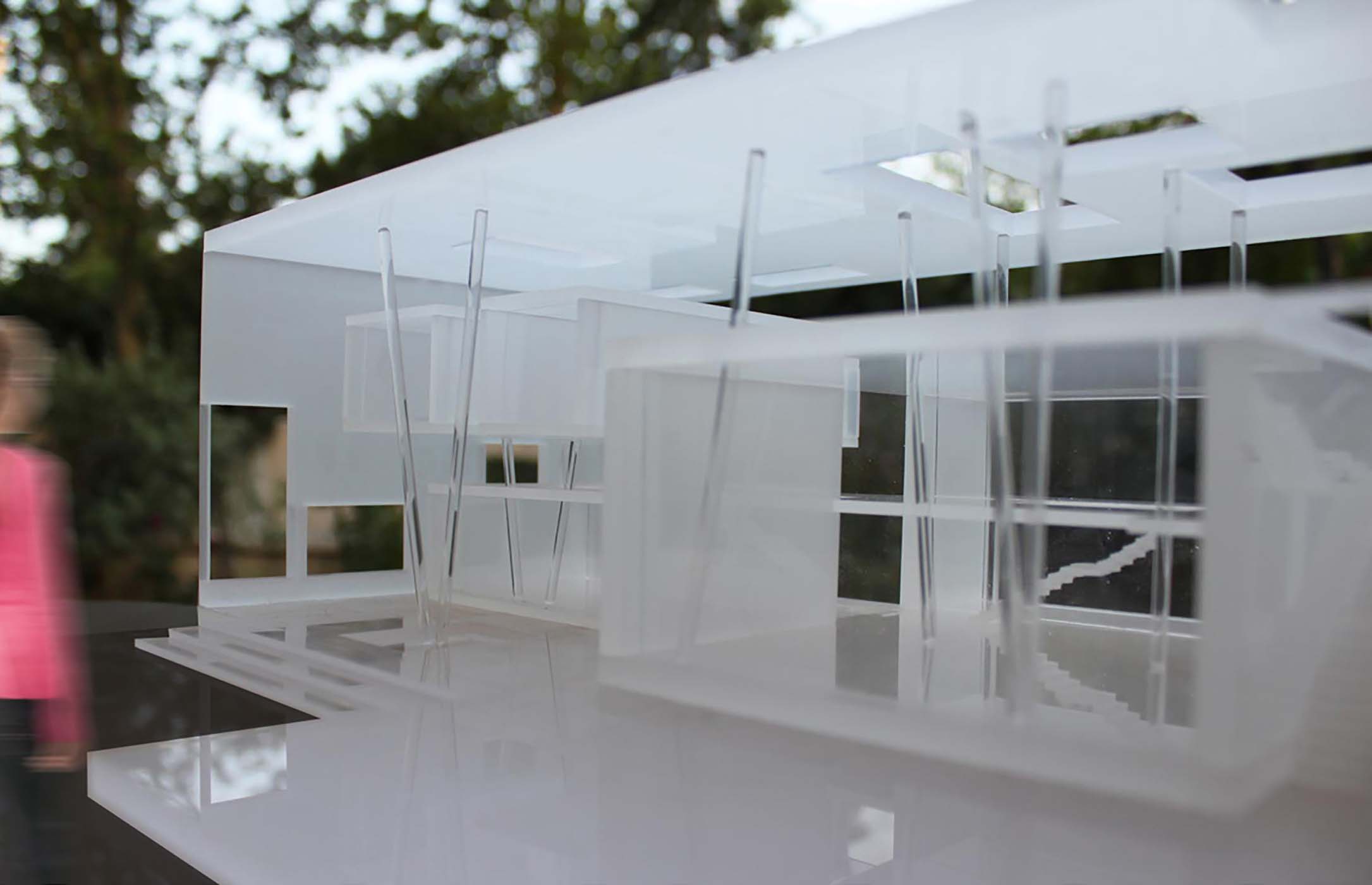 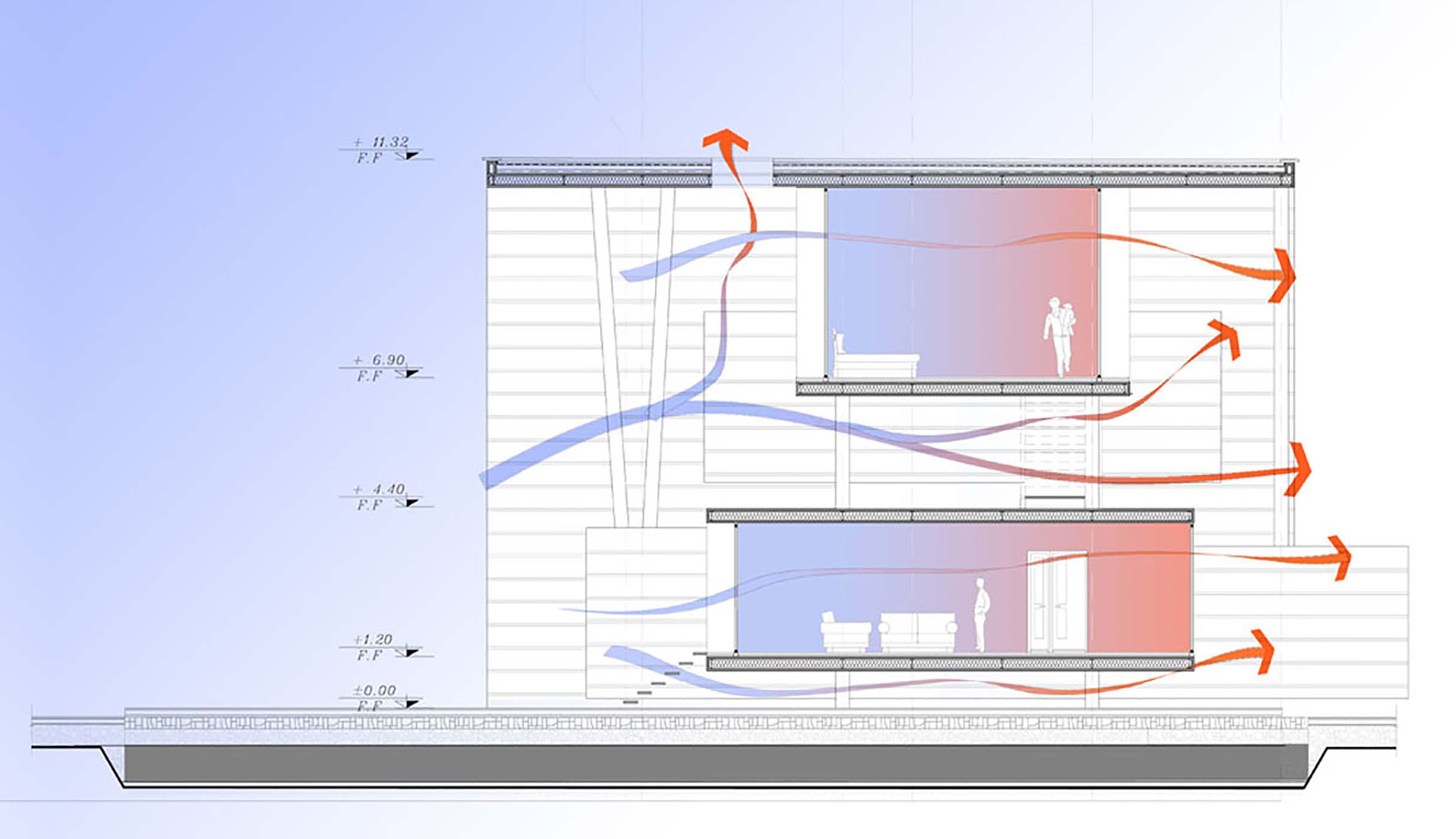 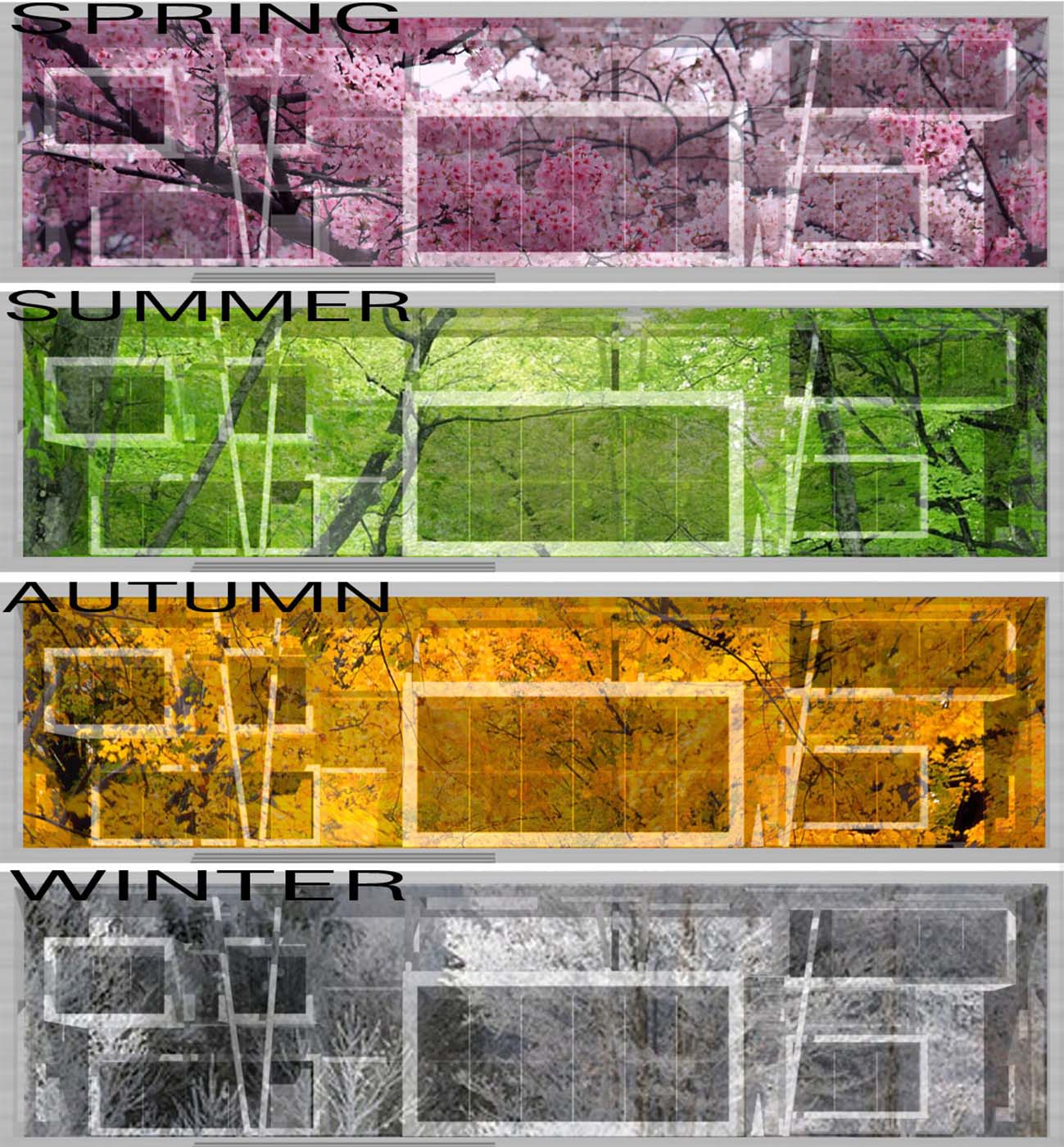