The project site is a part of The Mount-Damavand Region located on the north of Tehran -the capital city of Iran. It is a significant mountain in Persian mythology and has a special place in Persian literature.

Damavand Mountain .It is the only peak that is covered with snow the whole year and is therefore mostly white. During most times of the year you can see beautiful and different clouds sweeping above. It is a semi-active volcano that you feel it being an alive and dynamic element of the nature.

Damavand along with its natural beauty and landscape is a place for athletes to hike and climb especially during winters.

One of the settlements for mountain climbers is the Iranian Mountain Federation temporary Camp in Polour village located on the south of Damavand which is supposed to be replaced by the starting of our project.

Polour is well-known for being the climbing start point of the Mount. The site is in an ample area; therefore, we face to a vast pristine context around the region.

For the first challenge, there were key parameters on the process to achieve an intimate identity with its natural surroundings: The first and also the most prominent one is being in harmony with its natural context. In fact the nature itself leads us to the approach. We were looking for something new, a dialogue between the artificial life and nature.

Being inspired by the geological process of large-scaled movements of the earth‘s crust and its tectonic forces, Polour Rock Climbing Hall evinces through its initial concept.

By considering the nature as the principal theme, the form stems from the origin and responds to function immediately and simultaneously.

This is a place and time where Concept as a form, Context as the nature and Content as an activity, meet each other immediately and break the silence of environment and at the heart of this project is the mutual interaction between these three factors which having the privilege of such precious occasion, they have been frozen in the moment.  Therefor context blends with the activity and form.

We call it an achievement in this design when the natural-based form melts in the nature and activity.

As an achievement the architecture desires to be

The building pushes itself out of the layers of the crust, stems from the land. Rises, peaks and gradually moves down in its mountainous backdrop. You can sleep under the big tent, have a coffee inside the cave and also experience everything as hikers do.

By the way, the rock climbing hall describing the essence of a mountain with the new layer of today‘s life. So fragmented mass comes into a multi-facets entity and the movement generates a more complex based on triangles morphology.

Interplaying of light and shadow presents itself on multi-facets climbing hall like what happens on mountains’ surfaces in the nature.

So we distinguished the more public spaces such as restaurant, café, lobby and the main climbing hall by transparent incisions which identify the entrances clearly. The rest of areas are lightened by small triangular openings along with faces.

The coherent and massive architecture, originated from the layers of the earth, cut off by three of glass curtain walls ,which are hanged and welcomes the patrons warmly.

Plans & Section .The spatial formation of the project is organized with approximately total area of 4500 m2 extending along south-east to south-west.

The building saturated with natural light by a rigorous incision, as a transitive amber-colored atrium and triangular openings placed along its perimeter.

Therefore, the different scales are applied in content of architecture. It can be experienced from tiny to a large scale. From the bouldering hall to the outer layers of architecture which could be scaled. In fact, the entire building dedicated to architecture and as a result the inner and outer of architecture are intertwined.

It warmly affiliates the nature and surroundings which visually creeps into the bouldering hall. It creates a dynamic sport hall for climbers, from training to competition and evokes them dynamically. The climbing walls are mounted in front of the atrium, proposing new impressions for moving observers to experience. We tried to create an interactive architecture where aesthetics is as prominent as performance.

The covered material is white fiber-cement sheets fits slightly with each other. 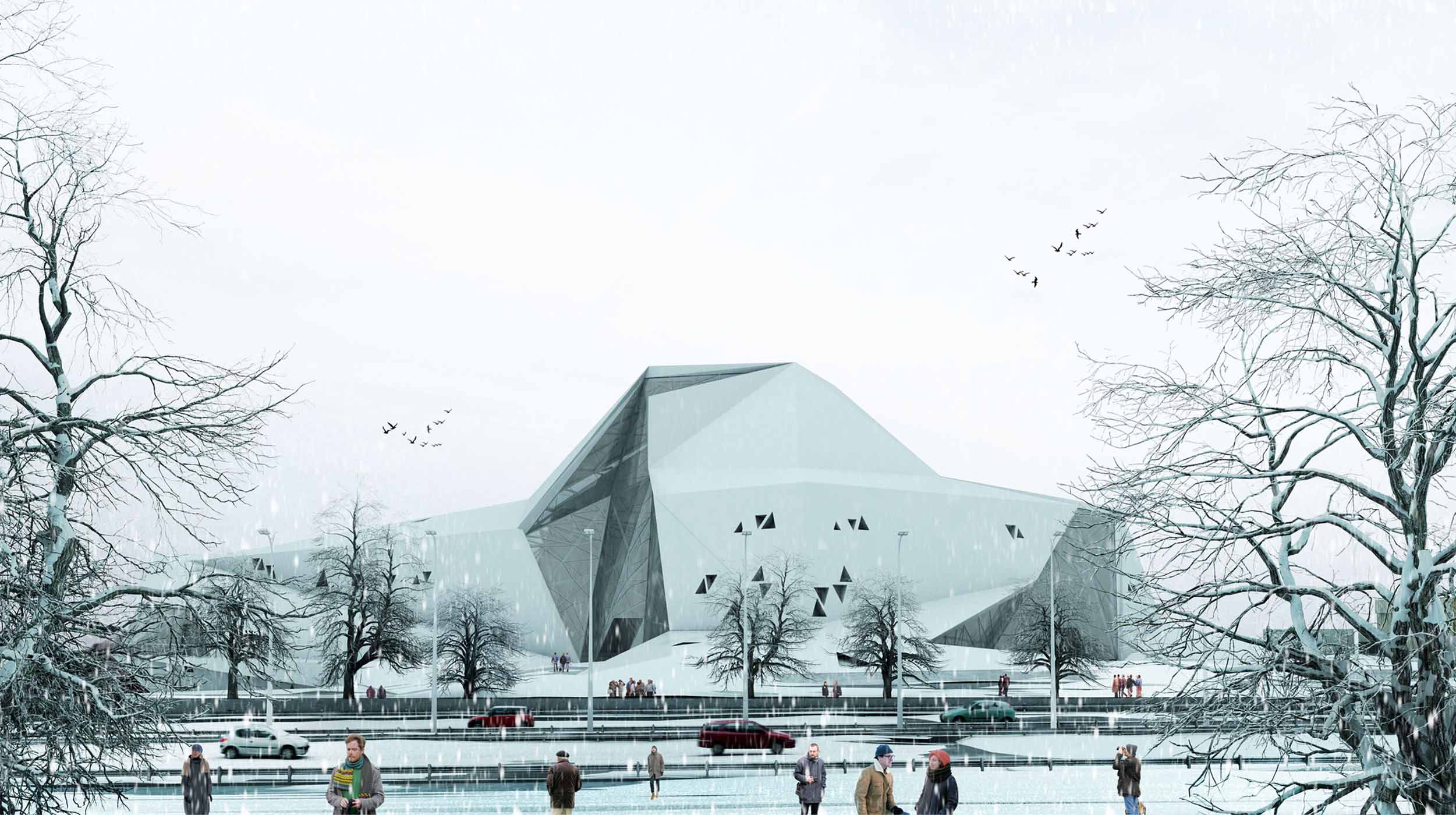 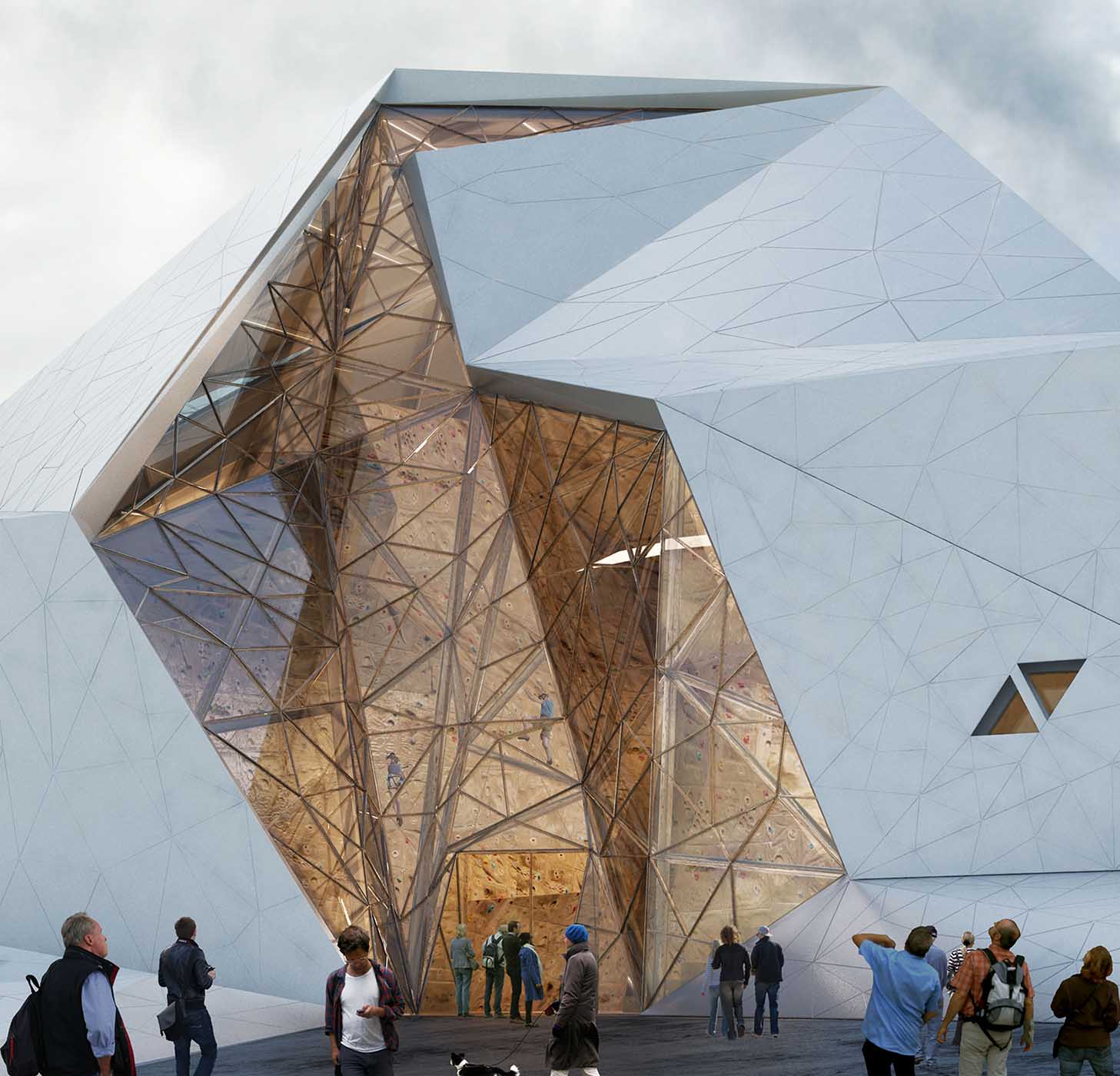 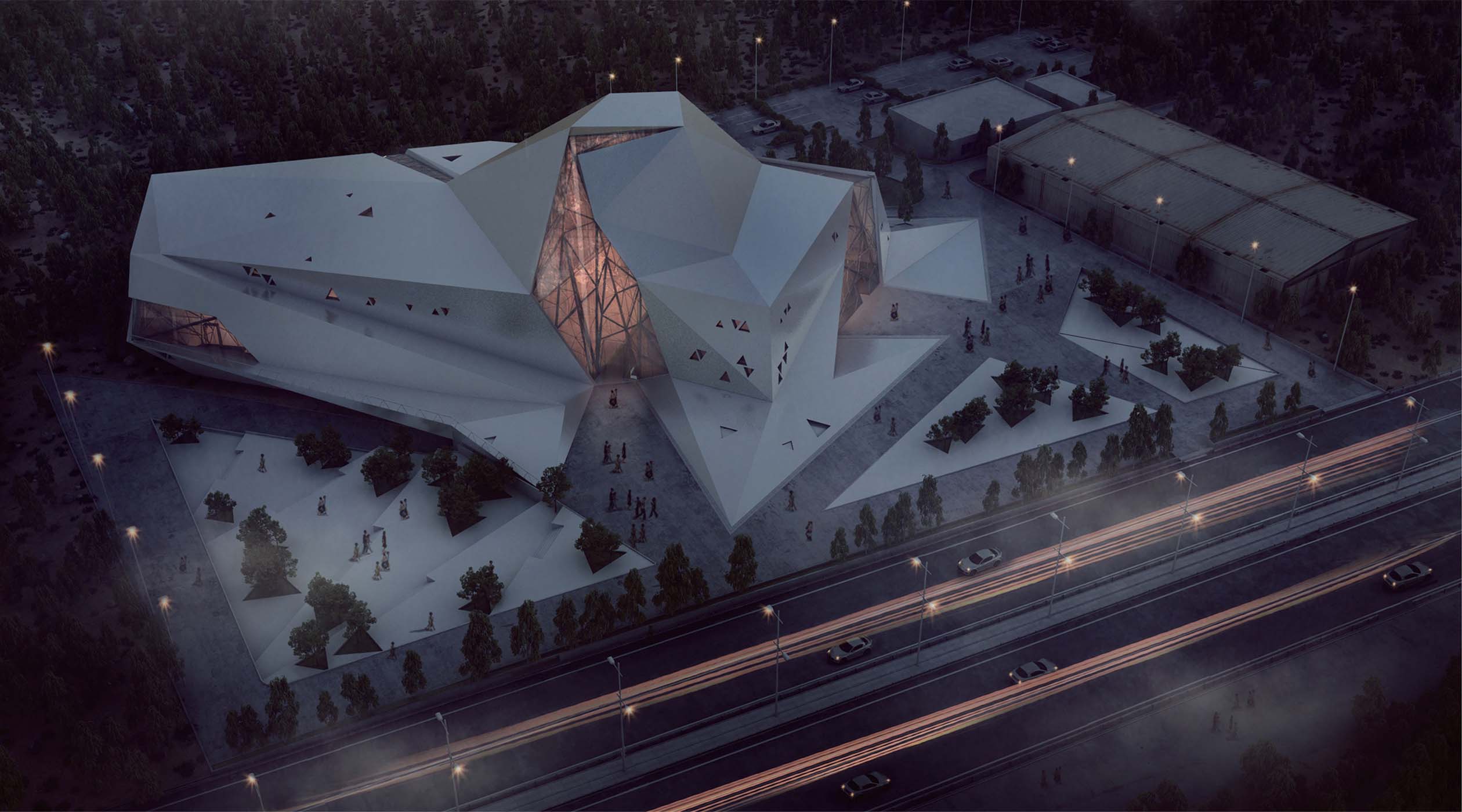 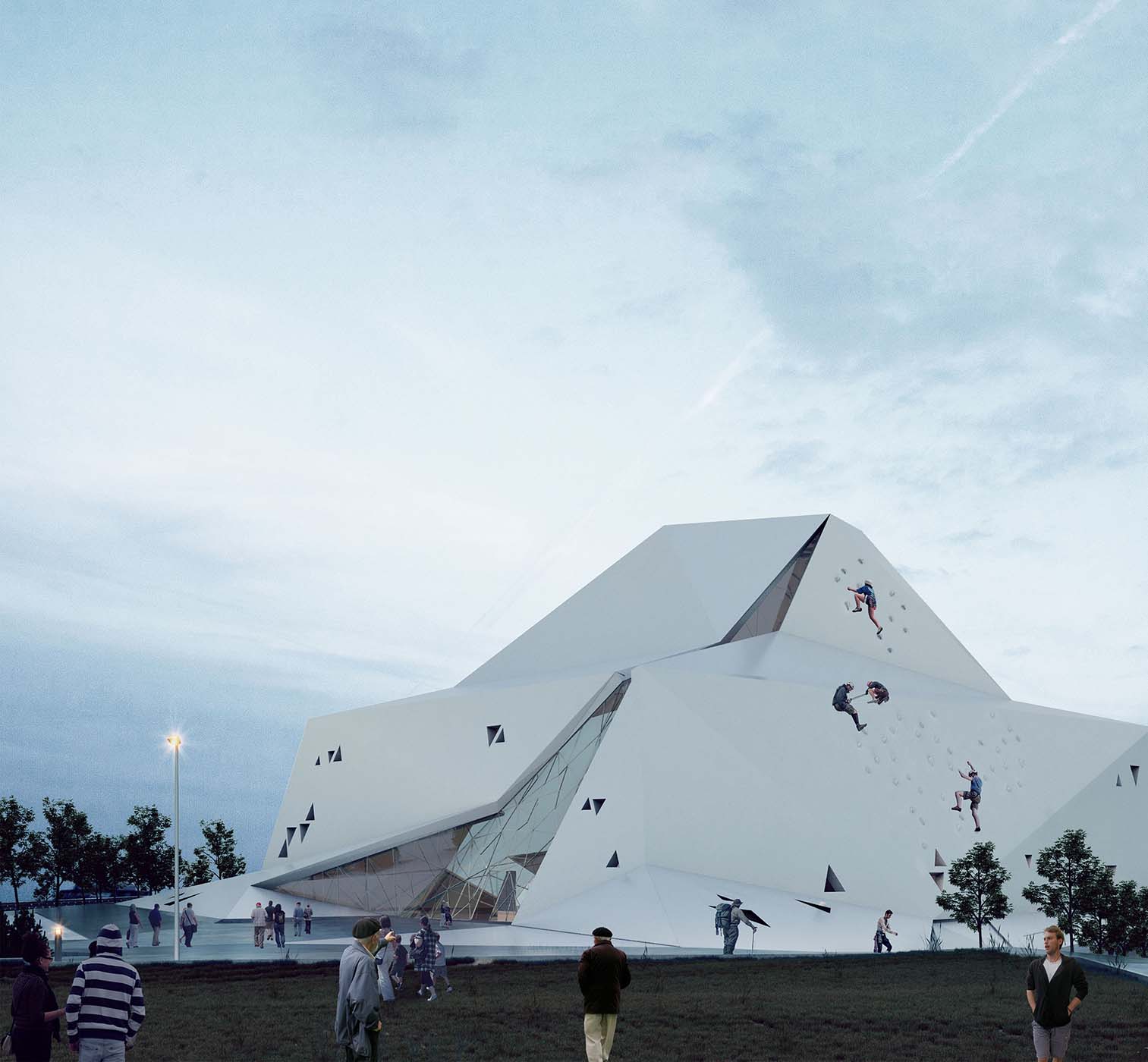 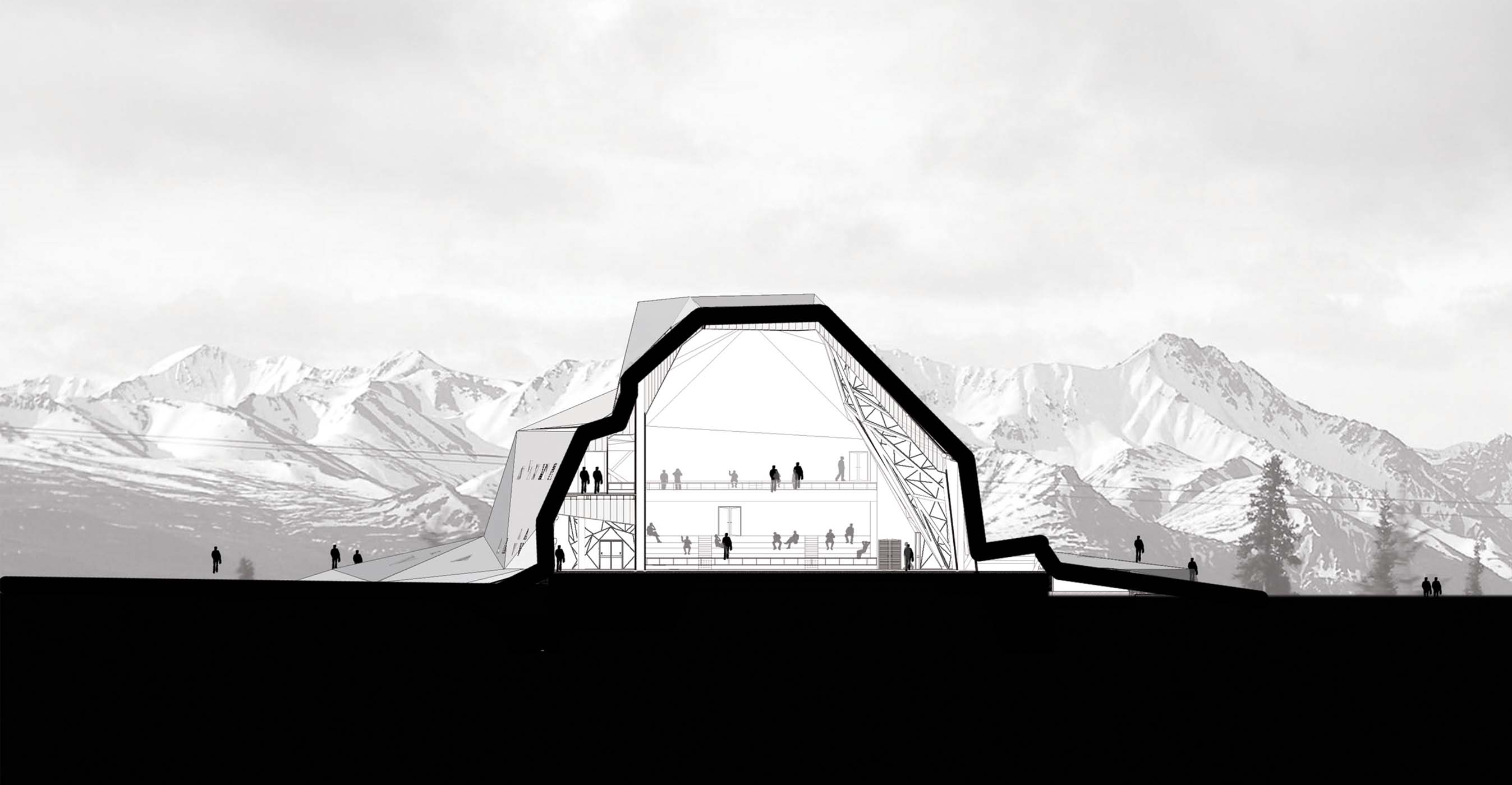 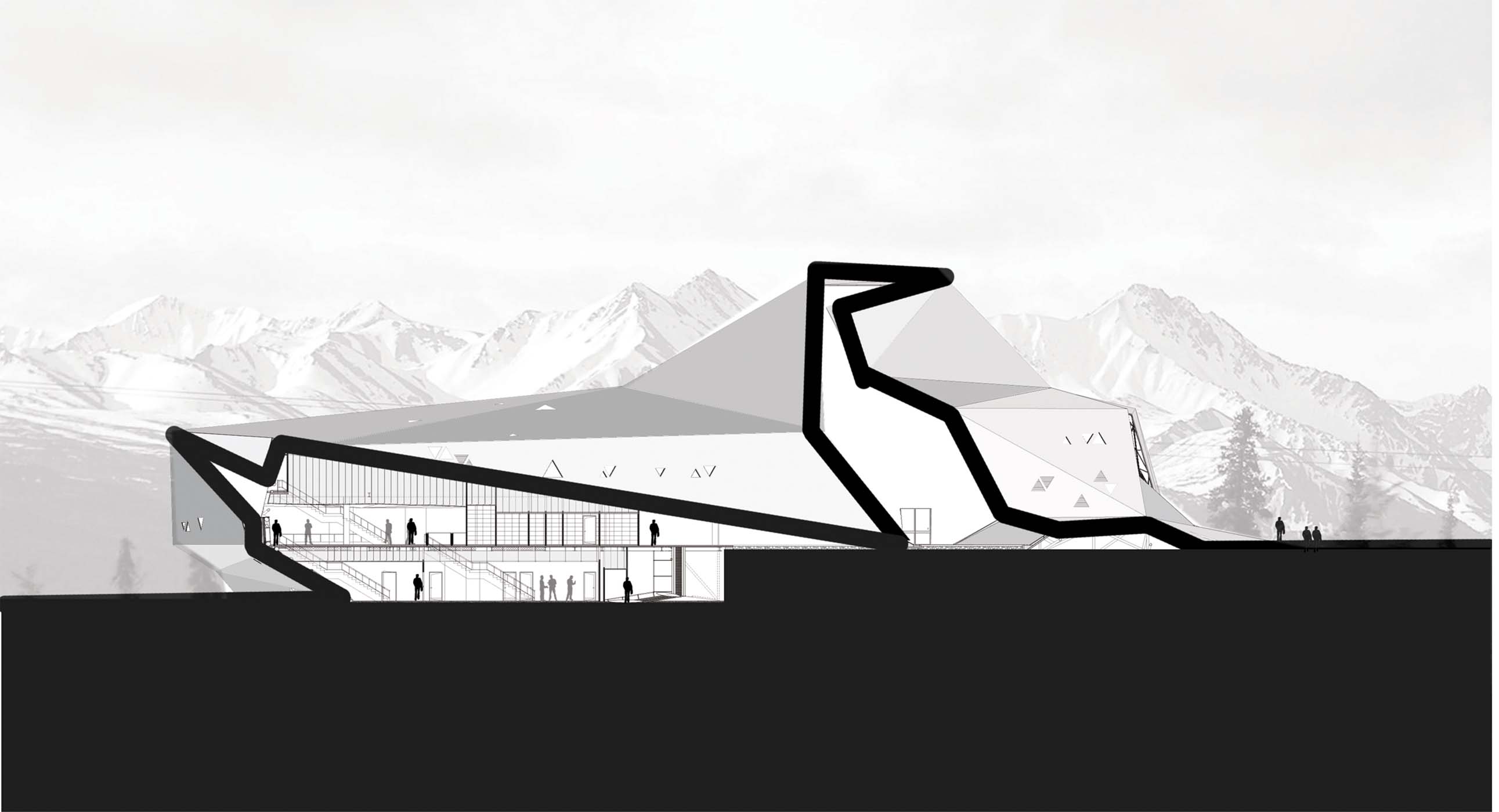 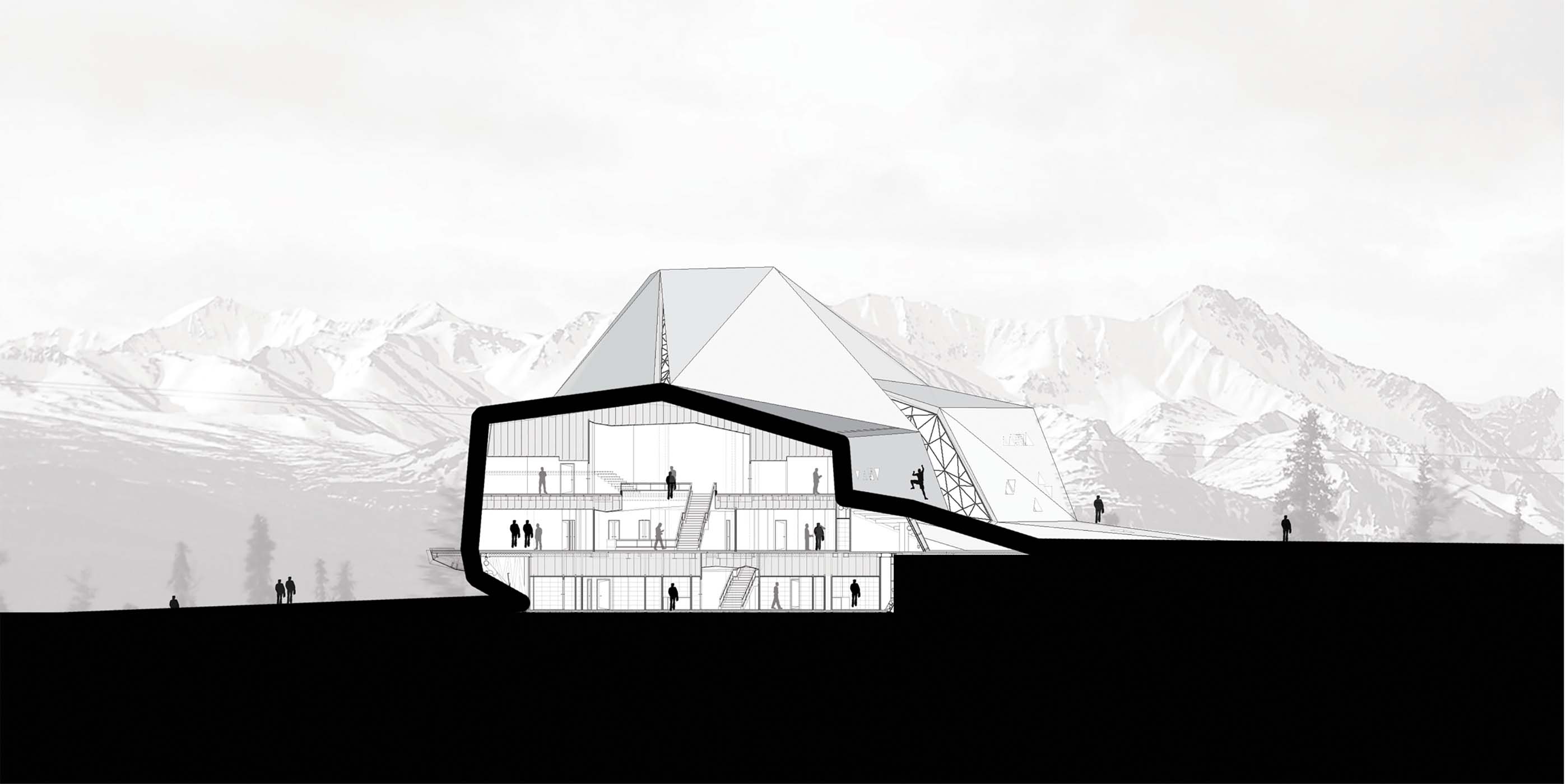 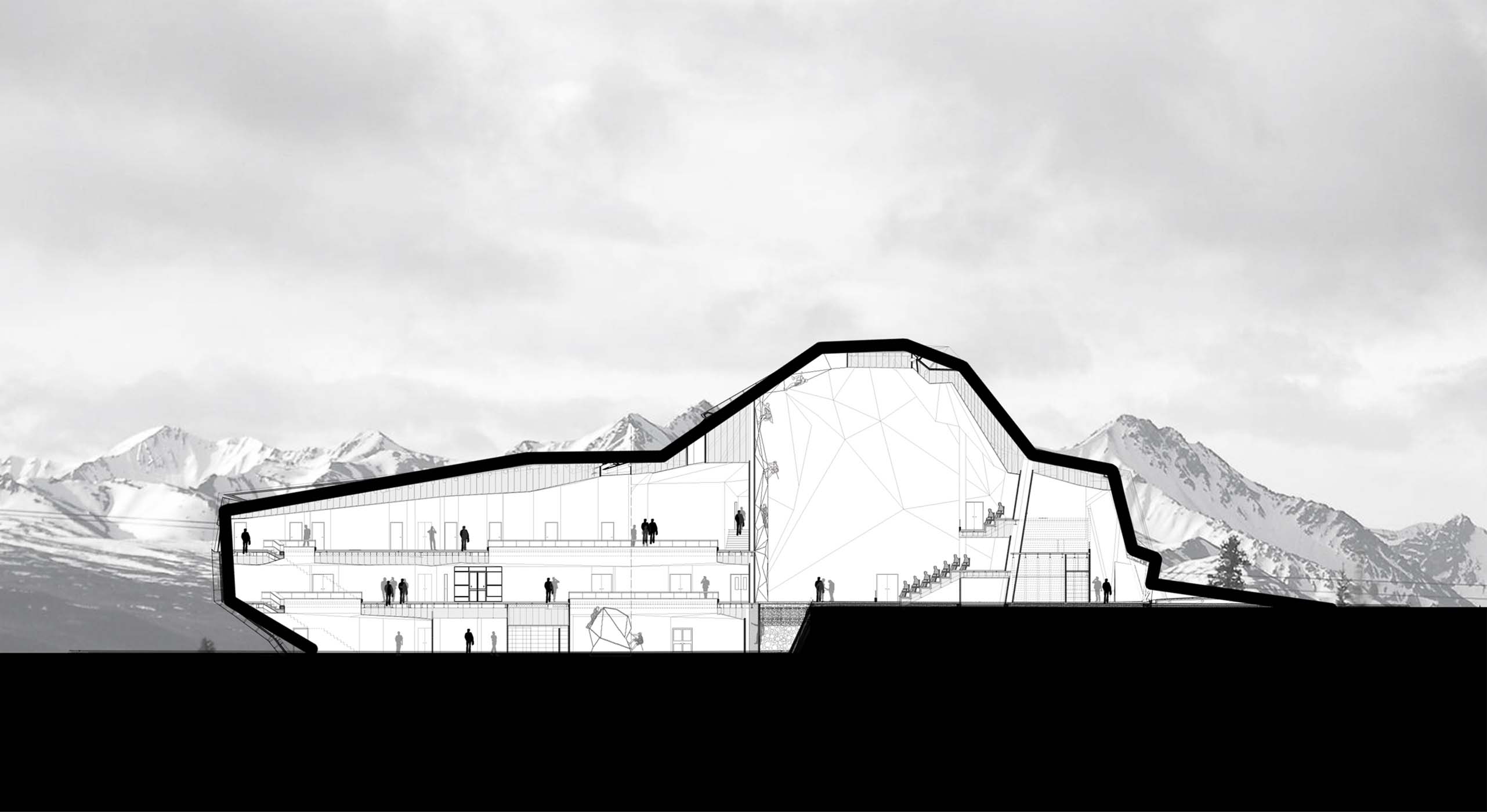