Zahedan is a city in southeastern Iran and the capital of the Sistan and Baluchestan Province, 1,352 meters above sea level .70 years ago it was only a small village named “Douzdab”.It is located in hot-dry region of Iran.

There is a harsh eco-social and cultural situation in Zahedan and people have been challenged by austere circumstances like, poverty, terrorism, violence and ethnical discrimination. Subsequently, it holds the first place in the number of illiterates and lack of access to education, particularly for women. Moreover it has always been known with “privation." This deprivation including poverty is visible in different indicators. For example more than 25 percent of the 2 million population of the province are serviced by relief agencies.

Insecurity and being a site for terrorist attacks while it is the main gate of drugs smuggling from eastern borders of Iran, lead this territory to have the lowest human development index in the country.

The dominant religion practiced in the area is Islam (Sunni-Shia), which is associated with civil unrest, gender-specific beliefs and customs issues of gender inequality; traditional attitude; and marriage customs. In fact women here are not just disadvantaged by lack of education. Old traditions mean that many of them face the prospect of early marriage.

We -as designers- encountered a special theme which was associated with social restrictions and codes. The project should not have loomed in the site while approaching a simple and unique form with a calm presence and concerning of students and academics were our main objectives. We were obliged to divide the space into two parts in observance of ethnical rules and mandatory governmental criteria. This project should have woven two objects subtly and illustrated a new perspective in minds. The project should have been adapted to dry and hot climate conditions and provided a pleasant architectural space simultaneously.

"A white statue floating on the water"

The project is situated in Sistan & Baluchestan university campus in respect to native and non-native university students and staff as our prime audience .The construction of this building with total area of about 3000 Sq.m started in 2006 .In accordance with client 's demand and project function, the students encounter the building from the main Blvd. The service areas are accessible from the eastern façade while it is surrounded by two buildings to the north and south.

The possibility of breaking the mass into two volumes in respect of government and ministry of science compulsory codes allowed us to not only make efficient and appropriate use of ground consciously, but also create an element to communicate interactively with surrounding landscape and people.

The special organization of the project has been defined in a way to present an idea of space in accordance with the physical planning. The project is trying to not only responds to physical planning requirements and climatic issues to approach a unify form, but also leaves effective influence on the whole campus. Moreover, in consideration with climatic circumstances, "statue on the water" attempts to provide an idealistic architectural space in peak of its active hours for two genders particularly in hot summers by slight contact of airflow, green area and water pool for creating natural air flow circulation. Meanwhile, water plays an essential role in Iranian architecture and urban planning for years, hence establishes a typology of architecture.

The windows are in sides of loops which continue to water and green area and induce a direct visual communication between students and environment. The interweaving of interior spaces also reveals a simple connection among visual and physical elements.

The folded skin which stems from a piece of land while creates spaces, beget shadows, expands along the surfaces, openings and combines with pillars to form a consolidated spatial identity. United glass which enhance the facade transparency while at times capturing circular, reflections of light, shadow and views of green spaces.

Having the total built area of 3000 Sq. meters; this project consists of 2 dining salons, each occupying 400 people -separated deliberately for two genders - and service spaces such as kitchen, storages.

In selecting materials process, bringing unity and consistency to the overall architectural composition in exterior surfaces and interior finishes was our principal attitude. Applying white Travertine stone and glass as the main materials demonstrates simplicity, purity and stability of the project. 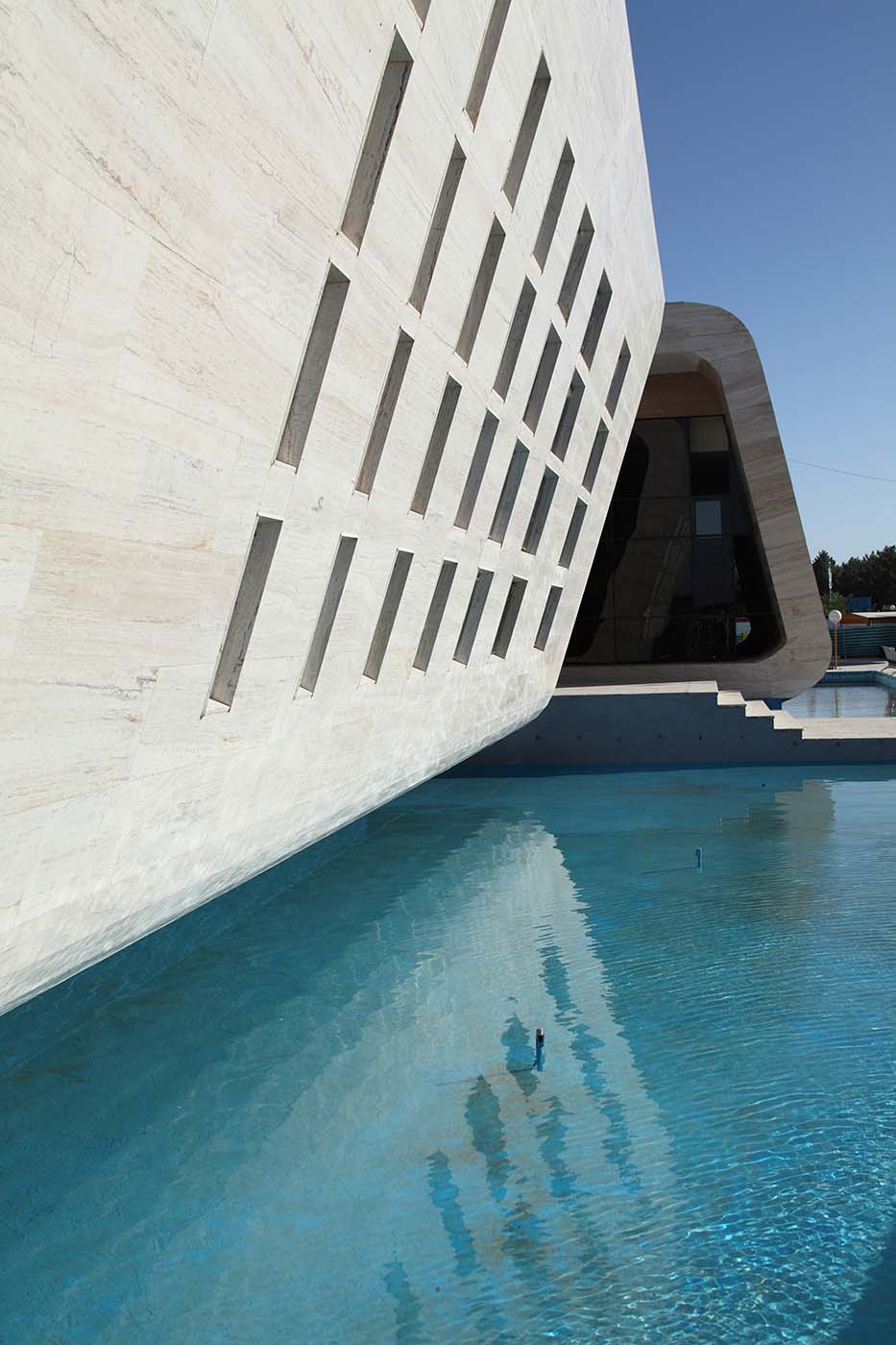 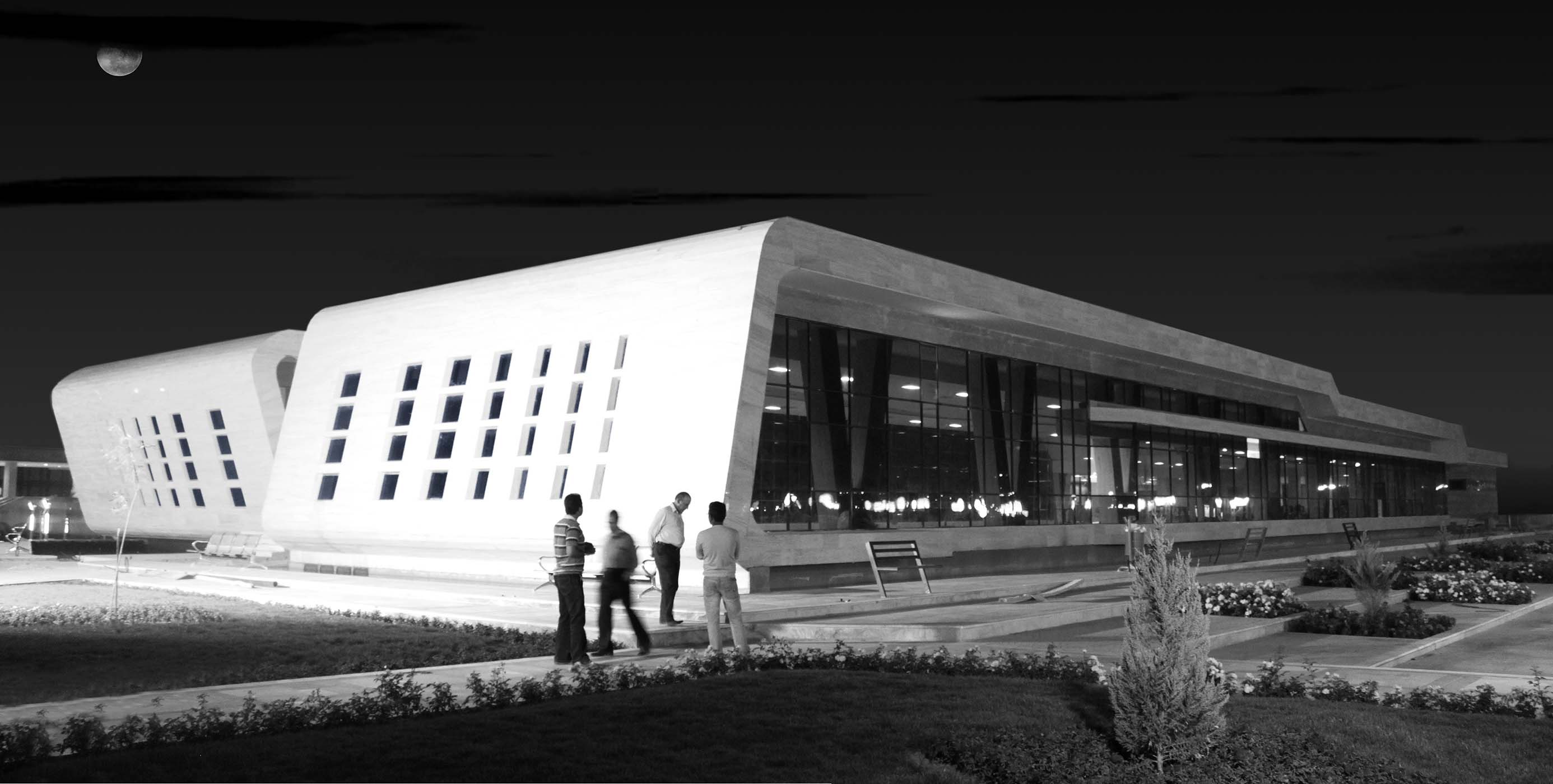 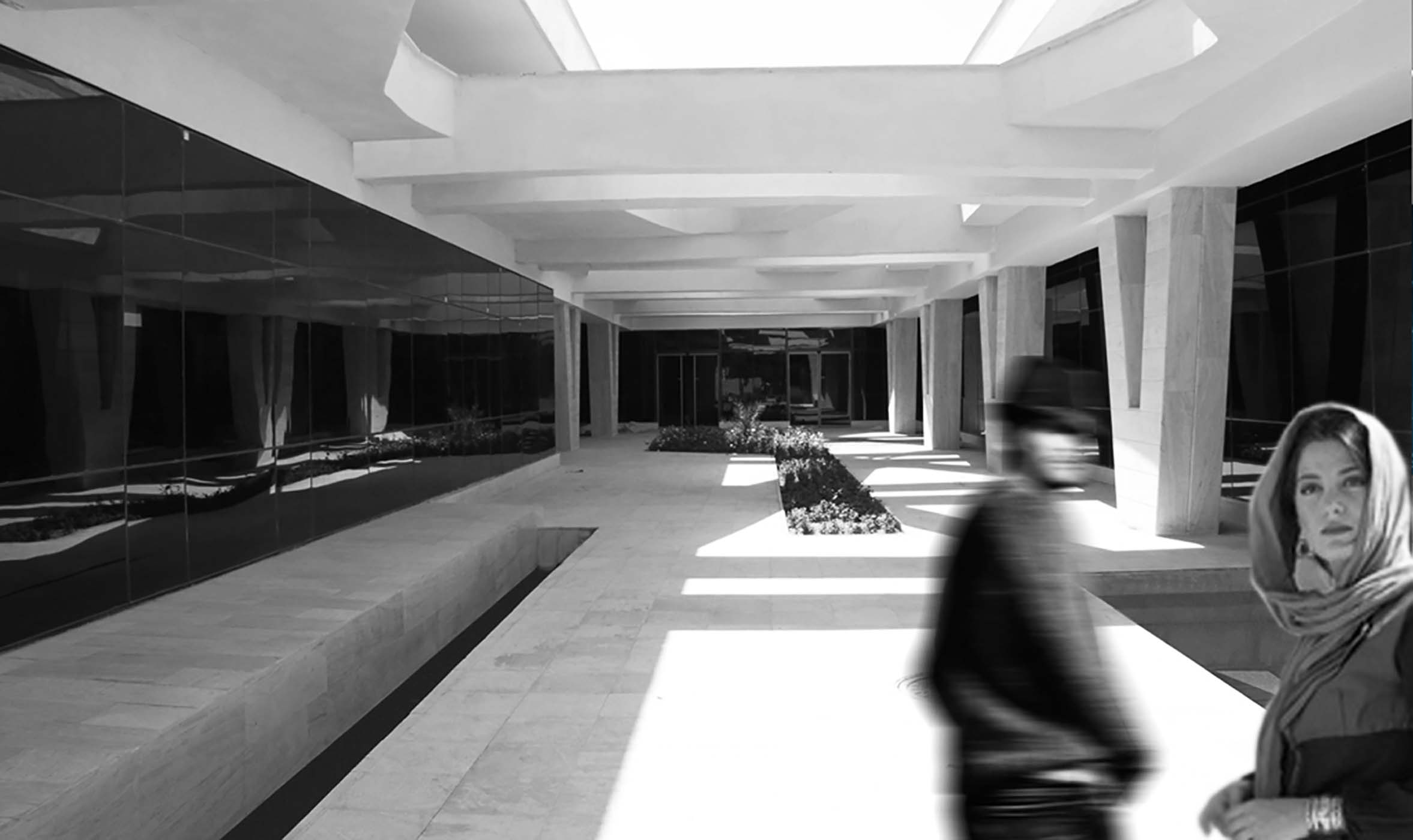 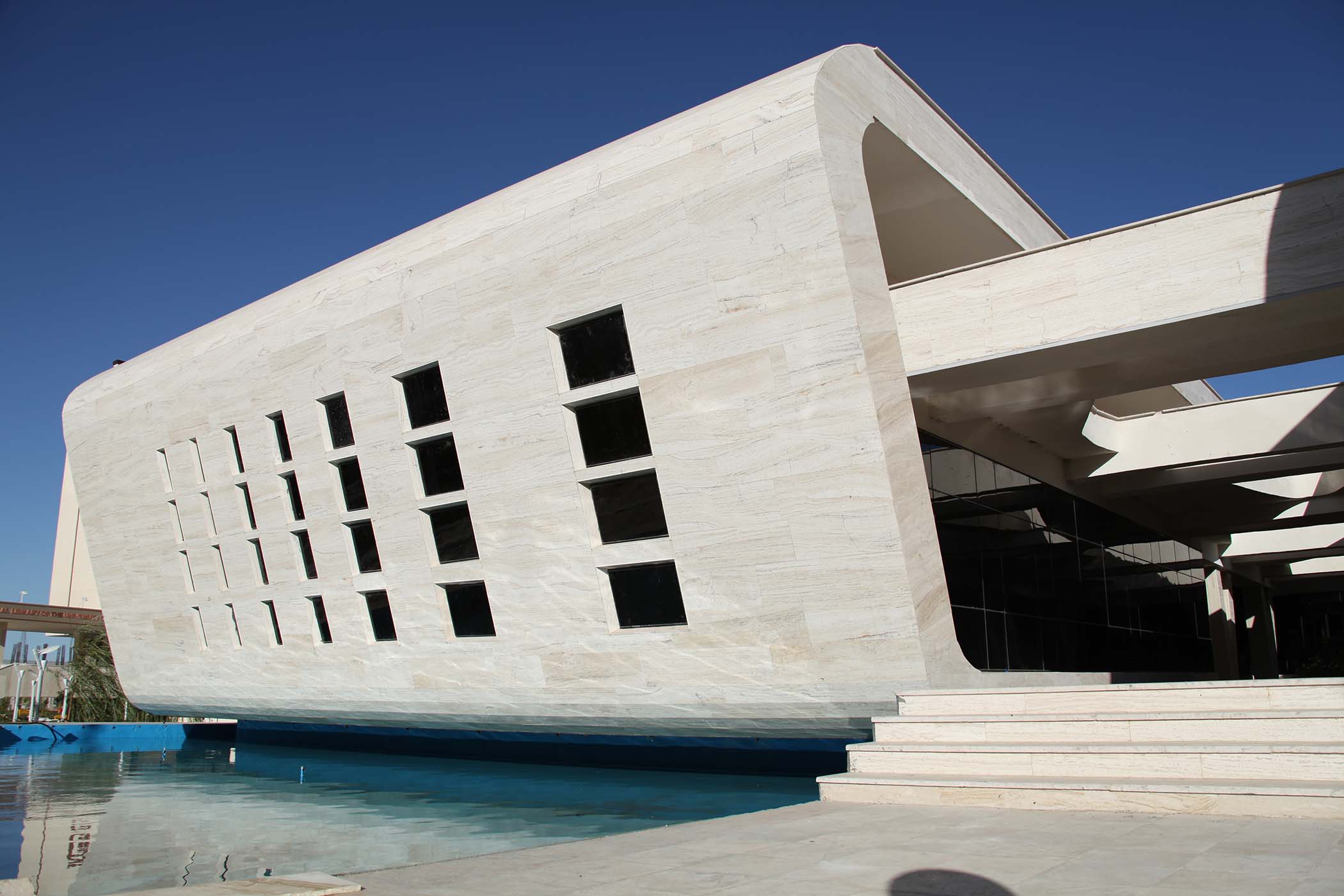 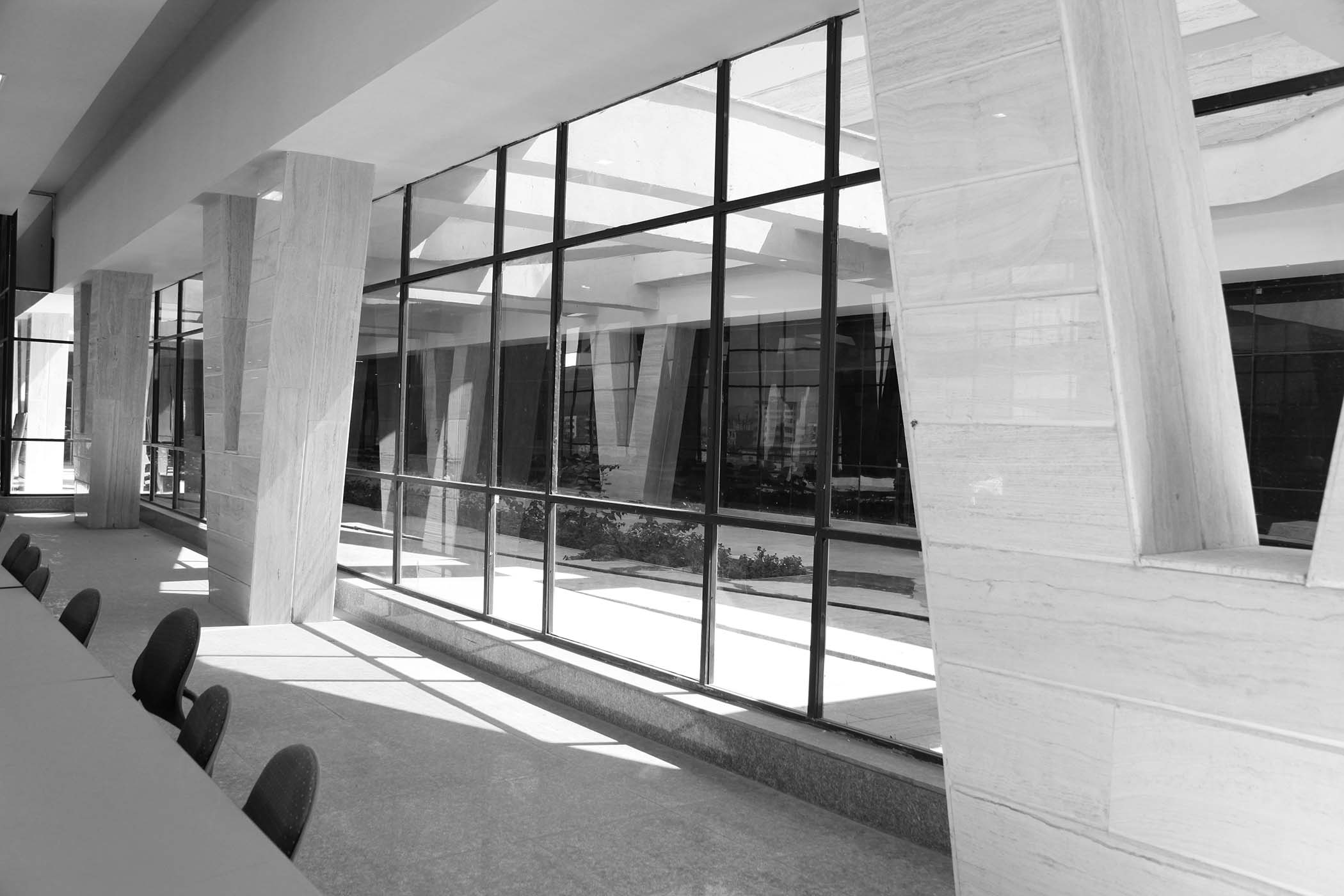 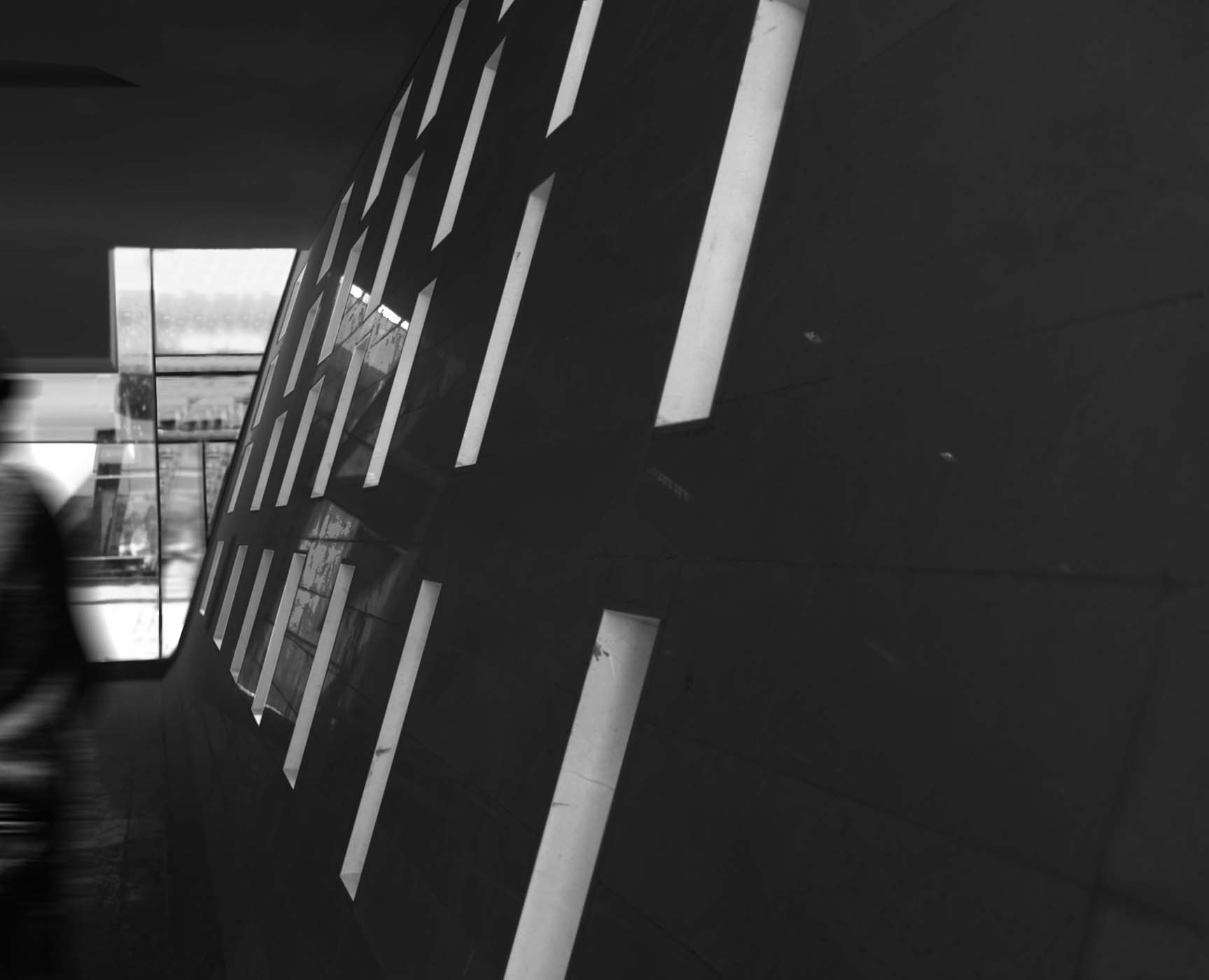 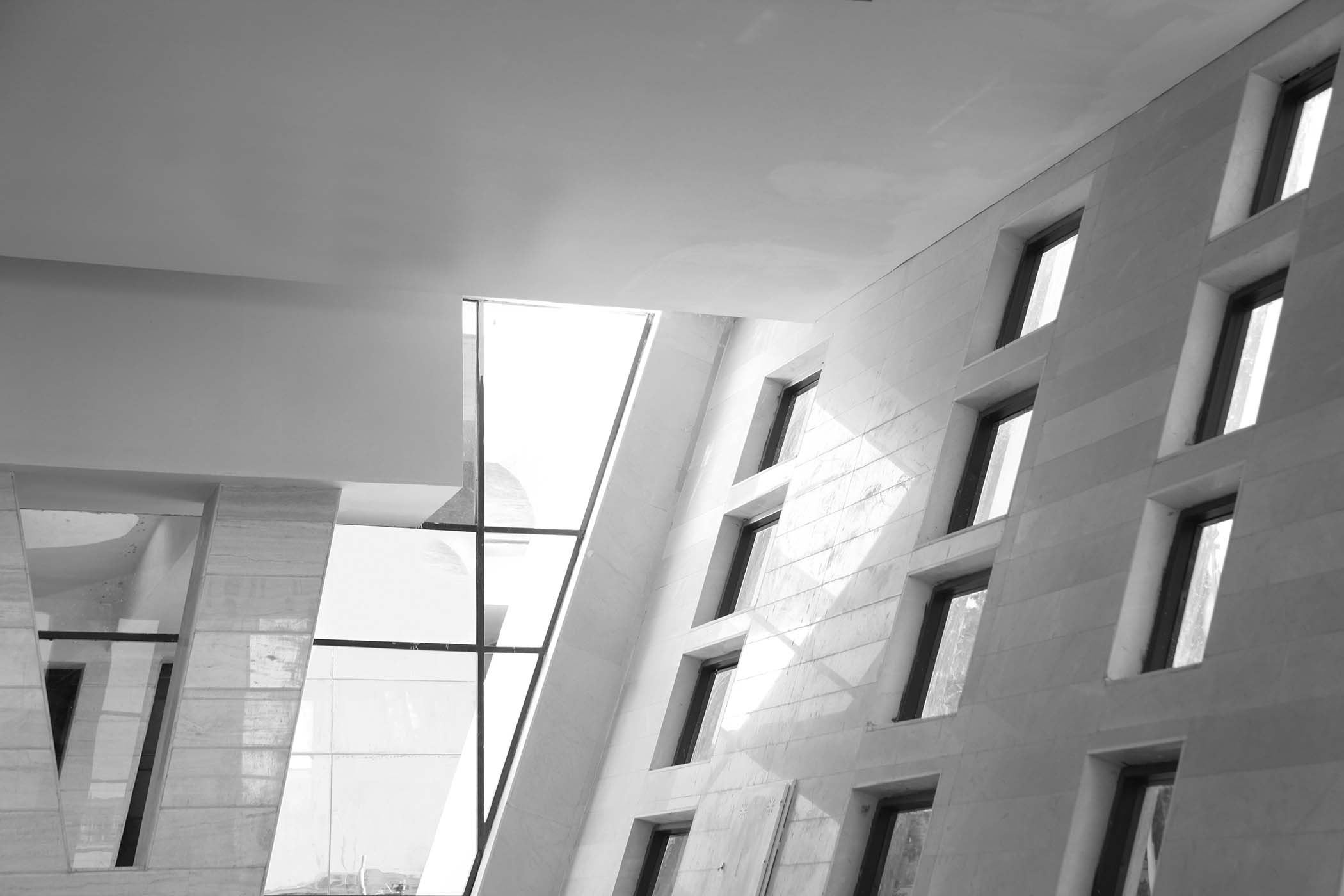